Pedestrian mowed down by riderless scooter 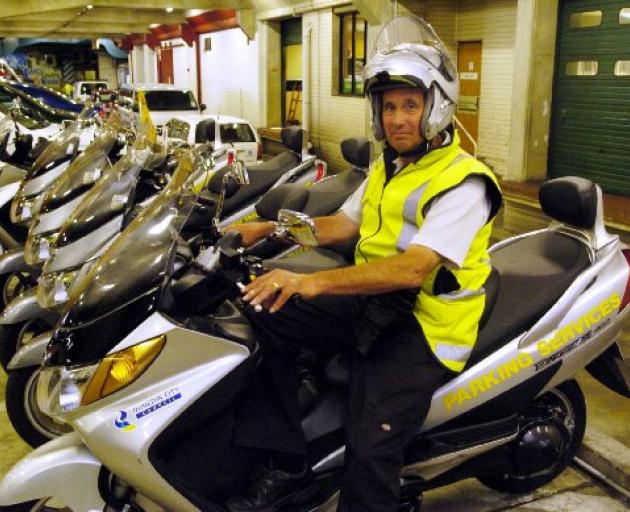 Parking officer Brian Benson, back at work yesterday after his scooter was let loose in Albany Street. Photo by Gerard O'Brien.
A riderless parking services scooter knocked down one pedestrian and narrowly missed several others in central Dunedin yesterday after it was maliciously set loose by a member of the public.

Dunedin City Council parking officer Brian Benson said he stepped off his scooter to issue a parking ticket at 12.17pm when a grey car pulled up beside him, its occupants yelling abuse.

As he continued to issue the ticket, the car pulled over and a man got out. The man twisted the throttle of the unattended scooter, which accelerated away east along Albany St.

The 250cc scooter, which weighs more than 150kg and has an automatic clutch, travelled about 160m in a straight line before colliding with a pedestrian who was crossing Albany and Great King Sts.

Mr Benson said he was unable to do anything but ‘‘scream a warning'' as the scooter, travelling at an estimated 30kmh, powered off along the street.

‘‘I could only watch him as the scooter [hit him], cartwheeling him into the air. A couple of people leapt out of the way. They were so lucky.''

A St John spokeswoman said the man was taken to Dunedin Hospital for treatment of a moderate head injury.

A hospital spokeswoman said the man was not admitted. The scooter received significant damage. Deciding he could not help the pedestrian, Mr Benson gave chase to the man, who ran away after setting the scooter off.

He chased the man to George St, down an alleyway and, at the guidance of people calling to him from surrounding windows, through a gate to Great King St, where he lost him.

Mr Benson said parking officers were used to verbal abuse and people had touched the scooters and pushed buttons before, but never set one off.

Police last night had not arrested anyone. The man who set the scooter off was described as aged 20-25, 180cm tall, of solid build, possibly Maori or Polynesian. He was wearing a white shirt, black board shorts, possibly a black beanie, and running shoes.

Sergeant Paul McLaughlan, of Dunedin, asked anyone with information to contact police.