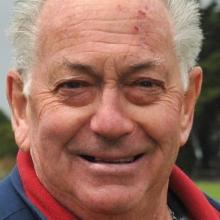 Colin Weatherall.
An Otago Peninsula landowner has been granted consent to subdivide his farmland and build four homes in an outstanding natural landscape area.

Steven Clearwater said he was not surprised by the outcome, following a Dunedin City Council hearing last month.

"It’s just a shame we had to jump through so many hoops."

Mr Clearwater initially applied for consent for eight homes on the isthmus between  Hoopers and Papanui Inlets, and on the northern slopes of Mt Charles.

But he halved that number when the consent hearing began.

In his decision, commissioner Colin Weatherall said the amended application was expected to have fewer adverse effects on the environment.

He treated "with caution" some of the evidence received by submitters opposing the consent.

He said  yesterday the benefits of amalgamating a large farm block on the site and making sure further development on it would not go ahead, and making sure homes to be built would be on lower land, tipped the balance in favour of the applicant.

The higher levels of the property could not be further subdivided, nor could they have residential development on them, meaning the land was protected. It was not possible to see any of the homes from the Hoopers Inlet side.

There were also "significant" lighting and colour controls.

Mr Clearwater said he could have applied for six 40ha blocks without needing consent.

"Everyone agrees what I have proposed is a far superior outcome in the long term for the landscape."

Not only Mr Clearwater who will be happy , also 4 lifestyle blockers will be lucky to live in such a wonderful area ,so its win win.