New Zealand First leader Winston Peters has emerged from political exile to claim credit for saving the "East Side" railway workshops in Dunedin. 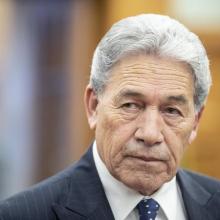 Winston Peters. Photo: RNZ
That revelation might have surprised workers at KiwiRail’s Hillside workshops, who in May cheered as Labour Finance minister Grant Robertson announced in the Budget that wagon-building capability was to be restored to the South Dunedin facility.

"We take pride in so many projects that we, and we alone, drove to success, even though this Government is claiming it as their work," Mr Peters told the NZ First party conference in Auckland yesterday, in his first major speech since his party failed to reach the 5% MMP threshold in last year’s election.

"Like a new Scott Base, like restoring the East Side [sic] railway workshops in Dunedin, like the biggest mussel farm in the world at Opotiki, and hundreds more."

Hillside has previously received funding from the Provincial Growth Fund, a regional assistance programme which New Zealand First negotiated as part of the confidence and supply agreement it agreed with Labour before becoming part of the previous government.

"This is critical long-term investment in infrastructure which will still be there in 50 years time."

Mr Peters (76), who was Ms Ardern’s deputy Prime Minister in that government, offered no suggestion in yesterday’s speech that he or the party he leads were calling it quits, despite no longer being in Parliament.

"So many scribes have tried, and continue to, write our obituary, but we are here today, as always steadfast and resolved to put New Zealand First ... We are coming back."

Mr Peters offered brief praise for Prime Minister Jacinda Ardern — "We are not challenging the Prime Minister’s good intentions and her crisis leadership, in government we backed it".

But he also condemned a host of Labour policies, including taxation, subsidisation of EVs and "Maori separatism".

Mr Peters also singled out the increased use of the word "Aotearoa" for criticism, noting it was used more than 1300 times in the report of the Independent Climate Change Commission while "New Zealand" was used 161 times.

"Why, without any reference to you, the democratic masters of your nation’s future, has a new name change cult suddenly appeared with this name in so many interviews, articles and adverts," Mr Peters said.

"Meanwhile settlements, particularly in Southland, urgently needing their bridges to be repaired have just been ignored."