The Pied Piper of Dunedin

By Molly Houseman
2 Comments
Sophie McLellan (12), of Waldronville, leads a group of curious neighbours about 2km to the Green Park cemetery on Anzac Day. 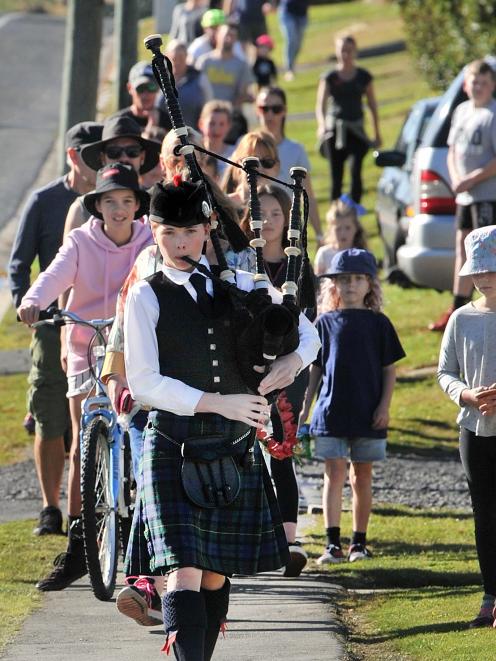 PHOTO: CHRISTINE O’CONNOR
As a member of the John McGlashan College Pipe Band and the Royal NZ Pipe Bands’ Association, she usually took part in a Green Island Anzac march.

Her mother, Melissa McLellan, said each year, Sophie would wait for the crowds to clear, and play the bagpipes at the grave of her two granddads, as well as a great-grandparent, who had been buried in the RSA section.

But this year, as the Covid-19 pandemic forced the cancellation of events, she played Amazing Grace at home and decided, as it was within walking distance, she would march to the cemetery alone.

It was not long before neighbours noticed and joined her, while maintaining distance between each other’s bubbles.

People, both young and old, stood on their driveways and balconies to watch.

Some followed her on foot, bikes and scooters.

At the cemetery, people who had been sitting on chairs at soldiers’ graves, stood to attention as Sophie walked in. They said it had been “wonderful” to hear the bagpipes while they were there in commemoration.

Thousands of miles away from my hometown (Dunedin) on this Anzac Day, this wonderful, talented young lady brought tears to my eyes.
Thanks O.D.T.

From a ex service person, the upmost respect Sophie a true leader, it also b ought a tear to my eyes. Your Grand fathers will be very proud of you.