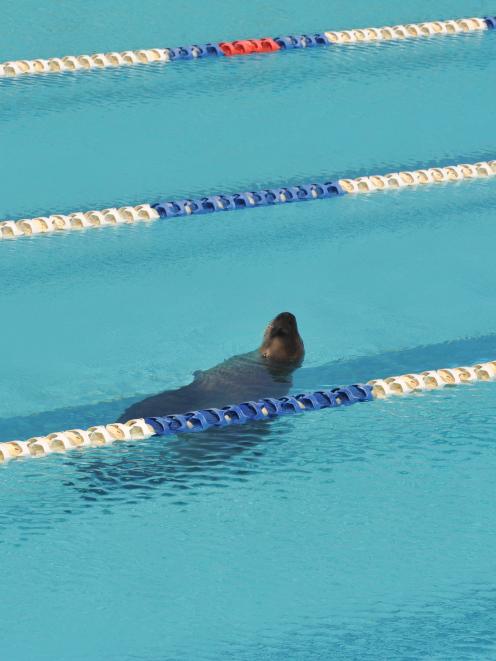 Stunned St Clair Hot Salt Water Pool staff and about 100 swimmers couldn't believe what they were seeing, but swimmers initially remained in the main pool after the laidback sea lion decided to sun himself near the toddlers' pool. Everyone left the water after the 1.5m animal took a dip mid-afternoon.

Department of Conservation conservation services manager David Agnew said the sea lion arrived at the pool's entrance in the morning and had a sleep.

"As the sun went around and it ended up in the shade it got up to move and the [pool entrance] doors opened. It let itself in."

The sea lion snoozed by the toddlers' pool before staff removed a fence and Agnew used two hockey sticks to coax the sea lion back to the ocean but it did not want to go, Agnew said.

The 28°C temperature clearly pleased the sea lion, used to a chilly 14°C average in the ocean, he said.

The New Zealand sea lion species, which is critically endangered, is known not to fear people. Agnew had moved three or four from homes or roads, but not public pools, in eight years. "They're curious and will come up to you. They don't attack."

Crowds were eventually moved out of sight to "bore" the sea lion out of the pool, Agnew said.

"We did it so it was more quiet and boring for it. It was looking around and thinking 'where is everyone?'. So it made its own way out, back through the double doors, through the cafe and reception and through the next double doors."

Then the sea lion realised the fun was over - and it wanted back into the pool complex, Agnew said.

"It was quite hard case. We had to lock the doors. It was trying to get back in. It made a big mess with oil from its flippers on the windows."

Sea lions are intelligent and it was possible, having enjoyed its previous visit, it would return to the pool. Staff worked late last night to clean the pools for reopening this morning, but a fence would be put at the entrance to teach the sea lion the pool was not for him.

"We have to think of a name so we can ask him to leave and he'll listen," said acting manager Nicola Smith.