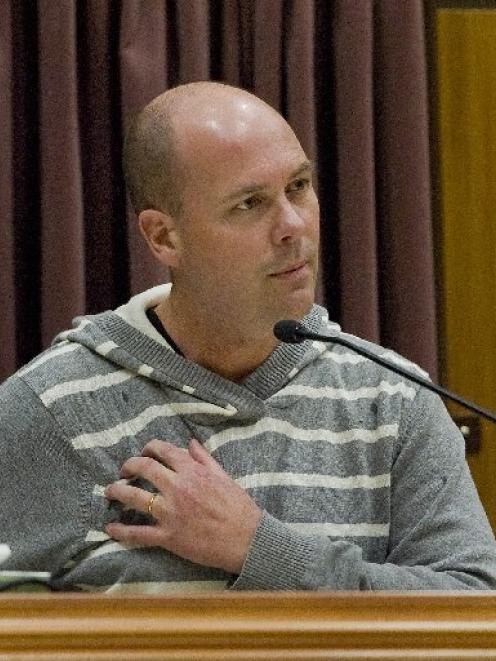 The scratch marks ran diagonally from Bain's right shoulder to just past his right nipple and appeared consistent with "clawing or grappling through clothing", Tom Samuel said.

And the spacing of the scratches was "consistent with fingers".The bruising looked like it was made by "someone pushing".

When he mentioned the marks to the accused, saying something like "how did you get those injuries?". Bain gave no explanation.

The lighting was good in the area where the accused was being processed following his remand on murder charges and he was standing close to Bain at the time, Mr Samuel said.

He was giving evidence on the 33rd day of David Cullen Bain's retrial for the murder of his family.

Bain (37) denies killing his parents Robin and Margaret, sisters Arawa and Laniet and younger brother Stephen at the family's Every St home on June 20, 1994.

Margaret and Laniet were shot in their beds, Arawa on the floor of her bedroom, Robin in the front room of the dilapidated two-storey wooden villa and Stephen after a violent struggle in his bedroom.

The Crown says Bain was the killer and that the injuries were inflicted during 14-year-old Stephen's fight for his life.

But the defence contends Robin Bain shot his wife and three of his children before committing suicide.

Bain is represented by Michael Reed QC, Helen Cull QC, Paul Morten and Matthew Karam, while Kieran Raftery, Cameron Mander and Robin Bates are prosecuting the case for the Crown.

The trial, before Justice Graham Panckhurst and the jury of seven women and five men, began on March 6. It is expected to take several more weeks.

Mr Samuel was one of six witnesses called yesterday.

He told the court the scratches and bruises were the only things he noticed when Bain removed his clothing.

He had drawn a diagram of the marks two years ago but, when he looked at the drawing, he said he remembered the marks extending further down than he had depicted them.

He said he had mentioned the matter to his boss at the old Dunedin prison at the time but had made no notes.

The only thing he vividly recalled about Bain's clothes was the bright colours, Mr Samuel said.

He agreed with Mr Reed the jersey colours were "very bright, vivid" but could not recall the actual colours.

Because of that, he was also unable to remember the identity of the other prison officer present when Bain's clothing was removed and replaced with a gown/poncho.

Earlier, physical education teacher Paul Hewson told the court he had met Bain through the Ariki Harrier Club in 1991.

He and Bain had the same coach and had run together. Bain was "promising enough" as a runner, the witness said, but had left after about a year because of a knee injury.

As sports co-coordinator at Bayfield High School from 1992, Mr Hewson got to know Bain's younger siblings, Arawa, Laniet and Stephen.

Arawa was head girl of the school that year and was very personable and outgoing, but Laniet was probably the one he spoke to the most.

She was in the sixth form and he took her class for physical education and sometimes also took her study class.

He said he was surprised how open Laniet was with him from early on.

She told him she had a child in Papua New Guinea after being raped, and said the baby was black. But she later said she had an abortion.

Mr Hewson said he did not know what to make of what Laniet told him, because while it could have been physiologically possible for her to have had a child she would have been very young.

Laniet also told him about an attempted suicide when she slashed her wrists and Arawa had saved her. But he recalled noticing her wrists once during a weights class and seeing no sign of any scarring.

He thought she was trying to get across to him that she was dying and would have been in severe trouble but for Arawa, Mr Hewson said.

He last saw Laniet in late May or early June 1994. She had left school at the end of the previous year.

He was about to go running from the Clubs and Societies Building in Albany St when Laniet called out to him. Because her hair was a different colour, a darkish red, he did not initially recognise her.

They chatted and she seemed "pretty happy, full of life".

She said she had been flatting in Duncan St and was working as a prostitute because she had run short of money.

"That shocked me a bit," Mr Hewson said but, given some of the other things she had said which turned out not to be true, he was unsure whether to believe her.

Laniet said she was going to live with father at Taieri Mouth. She seemed happy.

He had taught Stephen Bain for almost a term in 1993 and described him as "a live wire". He was "a strong and robust boy, very tenacious and physical, quite brave and hardy".

Mr Hewson said Stephen was a gangly boy, all arms and legs and had big hands and feet. He was not afraid of physical contact and had a quick temper, but he was not nasty.

His impression of Stephen was of someone who would certainly stand up for himself if anyone did something to him. He was "a brave guy".

"I got on well with him," the witness said, recalling that Stephen had introduced himself because he knew of the running connection with David.

He told the court he found all the Bain children to be very pleasant and friendly.

To Mr Reed, the witness said he had been somewhat sceptical about Laniet's claim she was a prostitute.

As to her claim she had slashed her wrists, he did not know whether there might have been no scarring because it had been "a feeble attempt, cry for help".

The Bain's family doctor, Peter McLeod, told the court his only prior knowledge of the family was that they had been in Papua New Guinea and the girls had both had malaria.

He was aware Margaret had not had the children vaccinated but said some people chose not to immunise, "perhaps for fear of adverse reactions".

He had treated Robin Bain for a chest infection some time before the murders and had also seen the accused after he cut his foot with a chainsaw.

Dr McLeod said he thought Robin Bain seemed relatively healthy, apart from the chest infection. He was slimly built and certainly not overweight.

There was no suggestion of any psychiatric illness, but Dr McLeod agreed Robin had not discussed anything intimate with him.

In answer to a question from the jury about whether malaria could have any long-term mental consequences, the witness said malaria was a recurring, quite severe illness and people could become very depressed if they continued to become ill.

He had never treated anyone with malaria.

An Opera Live friend of the accused gave evidence that the "strange dynamics" within the Bain family were well known among opera and musical groups in Dunedin.

The witness, who was granted name suppression, attended Bayfield High School with David Bain, who was a year ahead of him. Arawa was a year behind.

He had met the rest of the Bain family through their involvement in music or musical productions.

Margaret would sometimes play the piano at rehearsals if the usual accompanist was unavailable, Laniet and Robin had both worked on set constructions, and he knew Stephen through playing the trumpet.

He and David left school at the same time and they remained friends although there had been an incident about a disagreement over an ex-partner late in 1993. That had been resolved by early 1994 and they were still friends.

He would occasionally call at Bain's home and Margaret would normally also be there during the week.

Robin would not be present but he generally saw him during musical productions, the witness said.

From various discussions, not only with the accused but with Laniet and others, he knew relations between Robin and Margaret were strained, and that Robin lived at Taieri Mouth during the week and in a caravan at the back of the section when he was home.

He was also aware Laniet had a strained relationship with David at times.

The people in Opera Live and other groups knew the family was dysfunctional and that there were "strange dynamics" within the family, the witness said.

His last visit to the house would have been around early April 1994 when Bain was outside gardening.

And he recalled there had been an incident when the accused had cut his leg with a chainsaw.

Generally, he and the accused would talk outside while Bain was gardening, but sometimes they would talk over a pot of tea or go to Bain's bedroom to talk or to the front room to listen to music.

One night they had talked about firearms. As he was from a farming background, he was interested, the witness said.

Bain had showed him his rifle and they discussed firearm safety.

The witness said his rifle was kept in a rack while Bain's was in his wardrobe but it had a trigger lock.

It also had a silencer, which his rifle did not.

The accused said he kept the key to the trigger lock in a vase or container on his dressing table. He did not point it out.

Early in 1994, he and Bain went shooting on his parents' farm and he thought they each shot a rabbit.

To Mr Reed, the witness agreed that going after rabbits without a silencer on the gun was likely to scare the rest of the rabbits away after the first shot.

But he said he would not normally use a silencer.