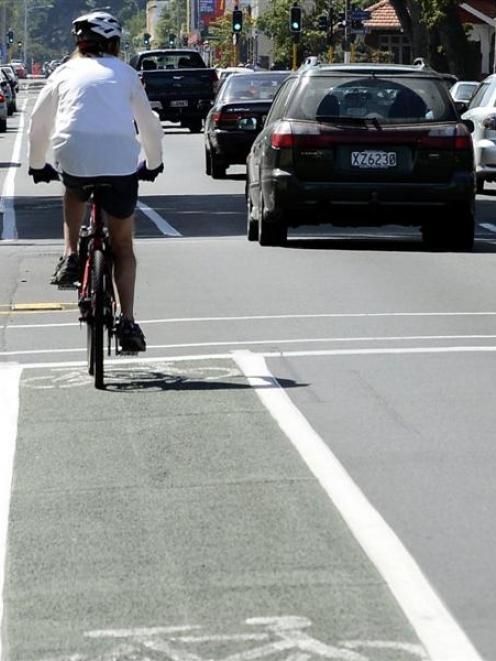 Submissions on cycling lane proposals are being called for by the NZTA and Dunedin City Council. Photo by Peter McIntosh.
A proposal to install separated lanes for cyclists on parts of the State Highway 1 network through Dunedin will be open for public opinion this week.

The New Zealand Transport Agency (NZTA) and Dunedin City Council are to start public consultation on an approach to improving cycle safety that has already attracted controversy since the council agreed earlier this year to consult on it.

Council transportation planning manager Sarah Connelly said a four-week consultation period, seeking submissions on two preferred options - both of which involve a separated cycle lane on one-way sections of SH1 - was set to begin on Friday.

The lanes are the NZTA's long-term response to an urgent call from the council to improve safety for cyclists on the two one-way streets through the central city, after two cyclists have been killed there.

The proposals are likely to receive many submissions, with AA Otago already expressing significant concerns and cycling advocates Spokes Dunedin already campaigning hard for people to support the proposal.

Spokes has provided links to send a message of support to NZTA to other cycle advocates across the country, with the message that support for Dunedin cycling lanes would set a precedent to be applied elsewhere in the country.

Eleven councillors in the previous council backed a proposal to consult on the two options, with just Cr Lee Vandervis and former councillor Neil Collins voting against it.

Cr Vandervis continues to criticise the proposal, particularly the potential loss or relocation of at least 200 car parks.

Council staff said the impact on provision of parking in the surrounding areas would be considered carefully.

Ms Connelly said meetings with some of the significantly affected businesses had been arranged to take place during the consultation period.

Any construction of the cycling lanes would be likely to be up to four years away.