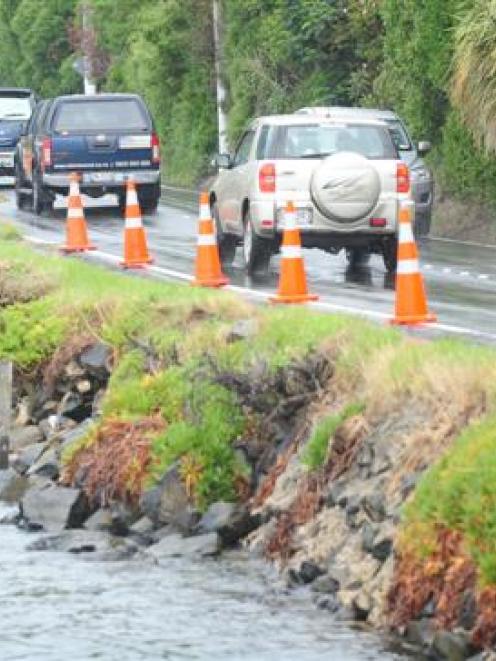 The Dunedin City Council is grappling with a funding shortfall for work on Portobello Rd, between Vauxhall and Doon St, Dunedin. Photo by Craig Baxter.
Future funding for the Otago Peninsula cycleway is up in the air, with New Zealand Transport Agency staff deciding today whether to continue full financial support for the latest step in the project.

NZTA Otago-Southland regional director Bruce Richards is awaiting advice before committing to subsidising the next stage of the cycleway project, a $1 million stretch between Vauxhall and Doon St.

The agency had been expected to contribute 62% of the cost of the project, involving seawall repairs and road widening to make room for the cycleway, as it had done for other completed sections of the $36.5 million project.

However, Dunedin City Council transportation operations programme engineer Michael Harrison said staff were shocked to learn on Friday the agency would cut its subsidy for the cycleway component of the Vauxhall work.

The change meant the overall subsidy was reduced by half, to 31%, leaving a $278,000 shortfall, he said. The budget hole had been overcome by rejigging other council roading budgets, in part because the poor condition of the seawall at Vauxhall meant repairs were considered critical this year, he said.

Sections of the seawall were at the end of their life and crumbling, with the possibility the wall could fail if not rebuilt, he said.

However, the initial NZTA decision raised doubts about future funding for other parts of the overall project, potentially creating an estimated $9 million shortfall that could spell delays if the same decision was repeated, he said.

"It's hit us like a bit of a bolt out of the blue and it does give us cause to say how are we going to do it?"

However, Mr Richards contacted the Otago Daily Times late yesterday - after learning a story was to be printed - to say a solution could yet be found.

It appeared "an inconsistency" in NZTA documentation meant the merits of the entire project had not been considered when assessing the Vauxhall stretch against criteria for NZTA regional funds, he said.

He expected to be able to make a final decision today, once advice was received.

"If the answer is yes, then I've got the delegation to approve it."

Mr Harrison said the initial decision stemmed from a change to the funding criteria under the new National-led Government, which placed a different emphasis on the measurement of projects' benefits.

"Our rating for that project now falls just below the funding line."

The Vauxhall section, and another at Glenfalloch, were due to begin shortly and be completed by June. If the NZTA decision was not reversed, it was possible no further work would be carried out in 2011-12, due to budgetary constraints, and a rethink of the wider project could lead to further delays, he said.

It was not yet clear what impact, if any, the initial decision by NZTA would have on cycleway extensions planed for the other side of Otago Harbour, Mr Harrison said.