Questions over who will pay for stadium 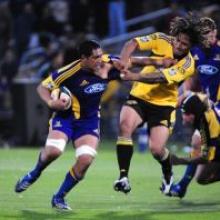 Highlander's star no 8 Steven Setephano is collared by Hurricanes winger Ma'a Nonu. Photo by Craig Baxter
The private sector's contribution to the stadium project was uppermost in the minds of councillors questioning their staff during the opening rounds of last night's stadium debate.

Cr Kate Wilson wanted to know where else the private sector might find its $45.5 million share of the $188 million budgeted for the stadium aside from the sale of naming rights and corporate suites.

General manager Athol Stephens replied that the stadium's operating company might need to borrow some.

He then explained to Cr Dave Cull that if money needed to be borrowed, then it was ‘‘more than likely'' the council would be expected to guarantee the loan.

In answer to a question from Cr Colin Weatherall, Mr Stephens said the rating agency Standards and Poor would change the council's credit rating from ‘‘AA positive'' to ‘‘AA stable'' if the stadium went ahead.

Cr Staynes considered the debt-servicing ability of the council's holding company, Dunedin City Holdings, would be ‘‘close to'' being at risk if it took on the $91.4 million of stadium debt.

Cr Syd Brown said it was ‘‘pretty clear'' the project would be ‘‘stretching the city to the limit'' and pointed to a section of the council staff report that said ‘‘other potential external funding sources of $20 million to $40 million are possible.''

Mr Stephens said finding this amount would ‘‘do away with a lot of risk''.

He suggested central government was ‘‘the obvious'' place to find the alternative funding.

However, answering a question from Cr John Bezett, he said going to central government for a grant ‘‘doesn't get you anywhere''.

Council chief executive Jim Harland noted that an inquiry suggested the Crown should pay local authority rates and that could mean an extra $3 million of revenue each year from such institutions as the University of Otago, the Dunedin Hospital and the Otago Polytechnic.

There was considerable debate over the impact of the stadium on individual ratepayers, Mr Stephens explaining to Cr Neil Collins that the stadium would add $66 to the rates bill for the average ratepayer - $1.27 a week.

Cr Wilson estimated that the stadium would cost a sheep farm valued at $1.7 million an extra $400 per year for the next 20 years.

Mr Harland said half the stadium's revenue would come from rugby and the income from other codes was ‘‘pretty small''.

Cr Weatherall asked what would happen if there were cost overruns or a funding shortfall.

‘‘It is fair to say the council is the first resort and the last resort,'' Mr Stephens said.

Cr Fliss Butcher wanted to know why the Carisbrook Stadium Trust had not set up a bank account for stadium supporters to pay in their contributions.

‘‘If there are all these people out there, why haven't they done that?''

Cr Bezett complained to committee chairman Richard Walls that he had not heard ‘‘one original question.''

Cr Walls replied that it was appropriate the public heard the questions.

Cr Weatherall questioned a trust suggestion that the planning process could be speeded up by having the Minister for the Environment call in the stadium's district plan change.

Mr Harland said the council's solicitor believed there was a ‘‘low probability'' of that happening.

And at that, Mayor Chin put the resolution that the council ‘‘commit'' to the stadium.