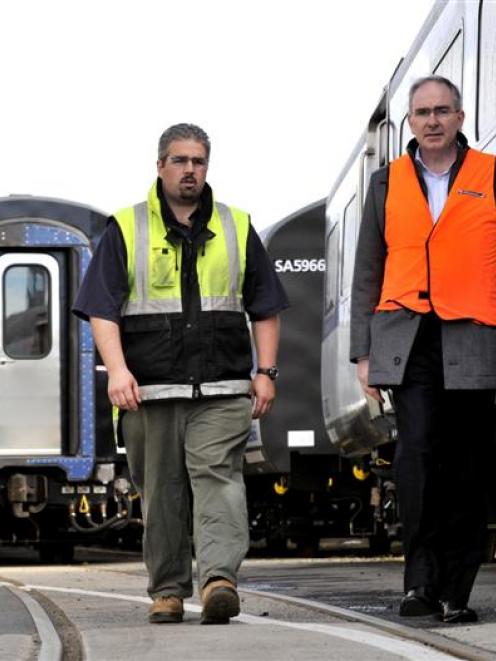 KiwiRail chief executive Jim Quinn met staff in Dunedin yesterday to break the news the workshop would not be bidding for the contract to build 38 three-car, electric multiple units (EMUs) and 13 electric locomotives as part of Auckland's $500 million urban rail development.

"KiwiRail's decision is a slap in the face to hundreds of skilled rail workers in Dunedin and Lower Hutt."

However, the chairman of the Dunedin group set up to press for the work to be done in New Zealand, John Christie, said while "some might see it as negative" news, he believed there were advantages in the Hillside workshops not being one of the bidders for the contract.

"... It certainly doesn't close the door in terms of Hillside and other providers of products and services from talking to the potential tenderers.

"It opens up the opportunity."

Mr Butson believed the workshops had been in a good position to get "all of the work" because of the advantages to the New Zealand economy.

He described the decision as "defeatism at its worst".

After the meeting, Mr Quinn said the decision was made because the New Zealand workshops could not deliver in the required timeframe and at a price that would be competitive with overseas manufacturers.

Because the workshops had not previously designed or built the type of train destined for Auckland, it would fail to be cost-competitive.

KiwiRail was "actively" trying to find work for the workshops from "any source we can get" and was "keen to present Dunedin's engineering capability to the wider world".

KiwiRail was "working hard" on a non-rail "international opportunity" on which he hoped to have details in coming weeks.

Mr Christie, who is also Otago Chamber of Commerce chief executive, said there was "a real willingness" from KiwiRail to work with the group.

"We're still in the game and that's the important thing."