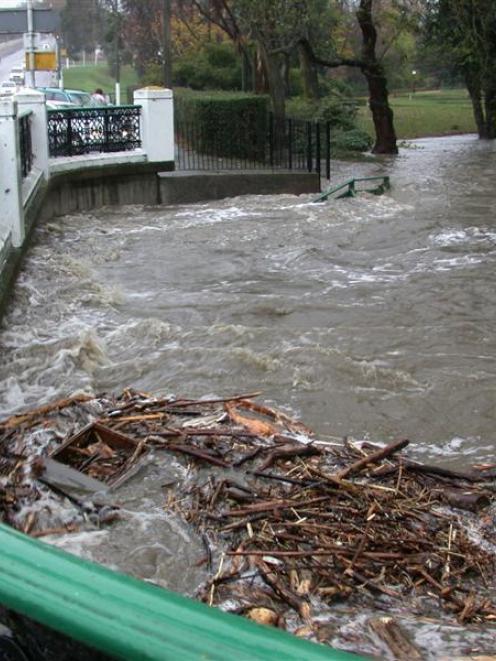 The Oamaru Creek at 11am was close to topping the bridge for SH 1 in Oamaru. Photo by David Bruce
The next few hours could be crucial for the sodden South, as civil defence authorities nervously eye swollen rivers to gauge the effect of high tide.

"High tide takes place at 1.15am tomorrow morning, and this may be a key event in determining the extent of flooding in coastal streams such as the Shag and Waikouaiti Rivers,"ORC duty flood manager Matt Hickey said.

Peak flows had receded in the Silver Stream, but sustained rain overnight could cause a rapid increase in flows, he said.

Sixteen bus passengers - 12 from one bus and four from the other - were taken to Oamaru motels ast night after being stranded by floodwaters.

Waitaki Civil Defence public information manager Rowan Carroll said one bus on its way to Dunedin had turned back to Oamaru after being stopped by flooding on State Highway One south of Oamaru.

The other was unable to leave Oamaru for Kurow because of flooding at Pukeri, north of Oamaru, at the junction of State Highway 83 and State Highway One.

The Waitaki District Council said about 9pm the Kakanui River continued to rise, and Kakanui Hall had been readied as an assembly point in case evacuations were needed.

Surface flooding had been reported about the Kakanui and Karu rivers, and river levels were likely to spill over the State Highway 1 bridge if high intensity rain fell overnight.

The rain which has drenched North Otago today is easing, but there is no word yet on when the main roads to Oamaru will reopen.

"At this point it's not clear whether State Highway 1 will reopen today," Waitaki Civil Defence spokesman Richard Mabon said this afternoon.

Oamaru has been effectively isolated today after surface flooding on State Highway 1 cut access from the north and the south.

The situation is acute north of the town, with no detour in place where SH1 is closed at Hilderthorpe.

• Send us your photos

Kurow and SH82 to Waimate, but many local roads remain closed.

After a day of drenching rain the forecast has improved, with the Metservice now indicating that the heaviest rainfalls have already occurred and rainfall in the next 48 hours will be less than previously predicted.

Earlier floodwaters hit properties in Oamaru, and at least one home has been evacuated amid heavy rain and rising rivers.

Waitaki District Civil Defence said it had reports of flooding affecting properties in Dacre St and Brent St, Oamaru, and a property at York Street, Richmond, north of Oamaru, has been evacuated.

"Residents need to listen to local radio stations for weather updates and to take note of any warnings that are issued," a spokesman said.

Schools across North Otago and in Oamaru were closed.

Volunteers at the Orwell St Chapel prepared soup and cheese rolls for anybody affected by flooding and had trucks and volunteers available to help flood-affected residents move furniture. They are available on (03) 434 6168.

In Dunedin, Northeast Valley school was evacuated after a culvert overflowed at the rear of the school.

This morning property owners living near the Water of Leith and Silver Stream waterways were put on flood alert as water levels rose rapidly following 100mm of rain overnight.

People are being advised to stay away from both rivers although flood protection works are expected to prevent them from breaching their banks.

Further north, several properties in the Bay of Plenty flooded and a Whakatane family was evacuated overnight.

Preparations to evacuate residents in Whakatane began shortly before midnight as the Wainui Te Whara Stream, which flows through the town, rose rapidly.

"It got to a very high level and spilled over a bridge and caused a lot of localised ponding.

It certainly flooded some properties, and we opened our welfare centre and we have one family there," Whakatane District Council chief executive Diane Turner told NZPA early today.

"We were on standby to evacuate a whole lot of people.

"I don't know the extent of the flooding at this stage, but the fire service were very busy pumping out homes both here, in Whakatane, and in Ohope."

Emergency services were given some respite when the rain stopped shortly before 1am, and Ms Turner said the water level had begun to recede.

Environment Canterbury said rain had fallen steadily in the area overnight, with 60-80mm of rain in the South Canterbury foothills up until 6am today, NZPA reported.

Rainfall intensities to date have been low with only surface flooding reported and river levels have not yet started to rise significantly, said Environment Canterbury flood controller Graham Sullivan, based in Timaru.

A total of 200-250mm of rain was forecast up to midday Wednesday for the South Canterbury foothills south of the Rangitata River to North Otago.

Rainfall intensities were expected to increase from mid morning with river levels rising this afternoon.

"Based on the weather forecast, flooding from foothill rivers is possible as the forecast rainfall totals are extreme," Mr Sullivan said.

"Farmers who have not already shifted stock from low lying areas should do so as soon as possible and monitor their river situation very closely."

River engineering staff yesterday opened the mouths of the Washdyke and Saltwater Creeks near Timaru so that large amounts of water would not back up and cause flooding.

In Gisborne, a tree had come down on State Highway 35 in Tolaga Bay, which Mr Oliver said was also believed to be weather related.

The MetService last night warned that severe weather was likely in eastern parts of the North Island, as well as in Canterbury and Otago, through to Wednesday.

A strong wind warning was also in place for coastal Wairarapa, where gale gusts of 120kmh were possible late this morning.

"There is certainly more rain forecast for later in the week, but it doesn't look like we're getting anymore right now," she said.

"We've had lots of streets flooded, slips, there's been some sewage infiltration in a few areas just simply because of the sheer volume of water that came down."

Workers spent the night trying to clear roads of debris, including a 500-cubic-metre slip blocking a lane on Mokoroa Gorge Rd, the main road between Whakatane and Ohope.