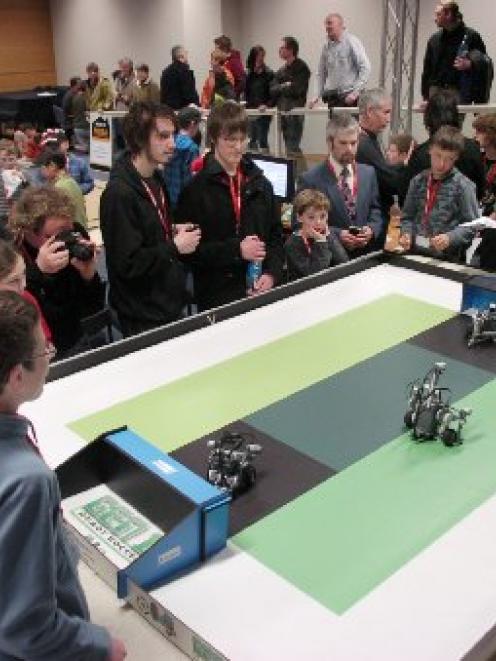 Otago Boys' High School pupil Jeffery McAlpine (13), left, and Tahuna Intermediate Team Wallie member Philip Anderson (12) go head-to-head in a game of soccer with their robots during the RoboCup Junior Otago Challenge on Saturday. Photo by Jane Dawber.
Seldom is there an event where people stand relatively stationary in a room filled with dance music, flashing lights and whirring electric motors. But these action-packed sights and sounds are not unusual for the RoboCup Junior Otago Challenge.

This year's challenge, held at the Otago Museum's Hutton Theatre on Saturday, attracted about 110 pupils in 31 teams from primary, intermediate and secondary schools around the region.

The teams created robots which they had programmed to perform specific tasks.

There were three categories in the challenge.

Pupils programmed their robots to either dance, follow a line from point A to B (with some obstacles along the way) or play soccer.

RoboCup Junior Otago Challenge chairman Donald Liddell said the event had been growing and he was delighted with how it had multiplied.

"This is our fifth year running the competition in Dunedin and this is the largest contingent of competitors we've had so far.

"The skills of the teams has come a long way. Some of the programming is very impressive."

Mr Liddell said the event aimed to encourage school pupils to develop practical and intellectual problem-solving and team work skills, but overall it aimed to generate an interest in science and technology.

"Often, the kids participating go on to university to study mechanical and electrical engineering."