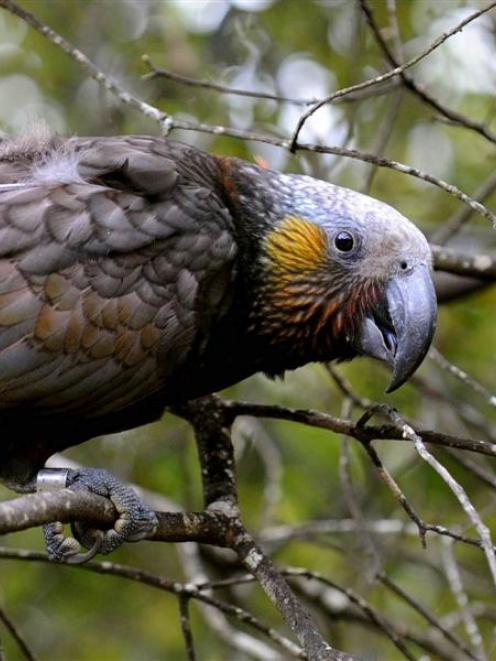 Ecosanctuary volunteer and former Dunedin Botanic Garden aviary curator Tony Pullar said the release of the "beautiful birds" on Saturday was a poignant moment. About 30 minutes after their cages were opened, the three male and three female birds, some aged 2 and some 3, were fossicking for seeds and insects.

The release was believed to be the first reintroduction of the native parrots to the South Island mainland, Mr Pullar said. A further breeding pair would remain in an enclosure to produce chicks and act as "call-birds".

Early European settlers in Otago reported seeing flocks of kaka which would take 10 minutes to pass overhead, he said. But deforestation, attacks by predators such as stoats and weasels, and competition from possums for food meant kaka numbers had greatly reduced.

"They are not endangered but are rare, and are certainly very thin on the ground," Mr Pullar said.

All the birds have been fitted with transmitters, attached by a small wire harness and effective within a 20km range.

While the parrot's strong beak and claws meant they were "no easy kill for cats", staff were keen to hear of any banded birds seen outside the sanctuary.

The ecosanctuary covers 307ha at Orokonui, near Waitati. A $2.1 million predator-proof fence was erected around 230ha to create a safe habitat for native species.

General manager Chris Baillie said the kaka release was the culmination of years of hard work by staff and volunteers.

"It's pretty momentous. Kaka are very sociable birds and will be a star attraction."

It was hoped robins would be released over summer and kiwi would be introduced next year provided the Department of Conservation approved the habitat as safe, she said.