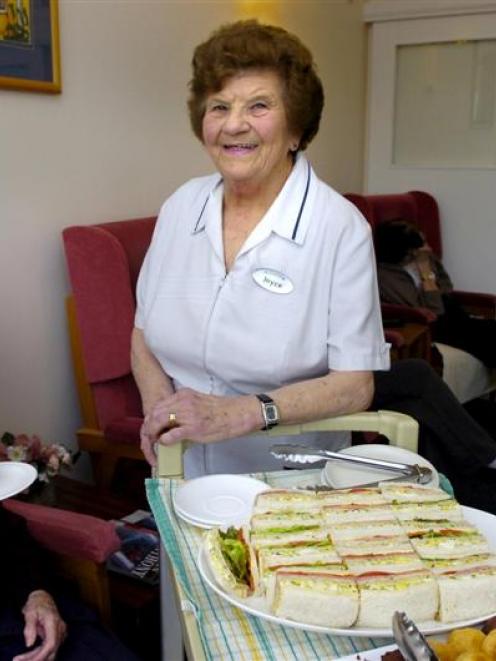 Joyce Myers (83) serves afternoon tea to Bell McGregor (99) to mark her retirement from Highview Rest Home.
She is older than many of the rest-home residents she helps, but age has not stopped 83-year-old Dunedin woman Joyce Myers from working.In fact, she only started her latest job at Highview Rest Home at age 78, working six- or seven-hour shifts as a carer.

More recently, she worked four hours a day doing the breakfast and supper shifts at Highview.

Even an angina attack, which put her in hospital for 12 days last June, did not slow her down much.

"I don't find it hard. I enjoy it. All the ladies are nice and I've made some good friends."

Her boss, Christine Carter, said Mrs Myers was easily her oldest employee and one of the hardest working.

"She's an amazing baker and a really hard worker."

A problem hip and some encouragement from her family convinced Mrs Myers to retire one last time.

"I don't know what I'm going to do now. I get bored easily," she said.

The first time she retired was from the Copper Kettle restaurant when she was 65, but she soon discovered retirement was not for her.

She started doing the baking for South City Coffee, but when it closed she found the boredom returning.

A newspaper advertisement led her to Highview, where she has become popular for her cinnamon oysters and caramel square.