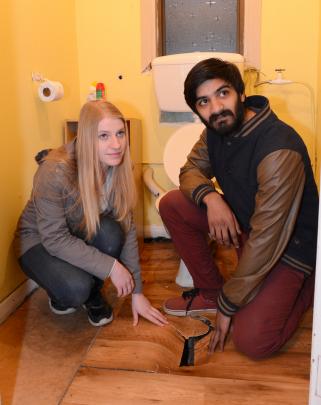 Dunedin students Larissa Coetzee and Manojan Thavaraja show a hole in the bathroom floor of their flat. Photo by Linda Robertson.

New rental rules are ''a good step'', but they do not address all the problems plaguing student flats, students and advocates say.

''It's a step in the right direction ... but it's not enough,'' energy researcher Fatima McKague said.

The rules, announced by Housing Minister Nick Smith on Thursday, will require rental properties to have below-floor and ceiling insulation by July 2019 (unless it is impractical to retrofit) and that the standard of insulation be declared in tenancy agreements.

They also give more power and protection to tenants to go after non-compliant landlords and require the installation of smoke alarms.

Students Larissa Coetzee and Manojan Thavaraja said the new rules might have helped with their current living situation.

They have been living in a draughty flat with holes in the walls and floor and leaks in the roof for the past year and a-half, and they were finally moving out, they said.

''No-one wants to live in these conditions,'' Ms Coetzee said.

Ceiling and under-floor insulation would have helped.

''But there are other problems in the house that would just make it ineffective ... all the heat we'd be trying to keep inside would just escape.''

More significant in Mr Thavaraja and Ms Coetzee's case would have been the expanded powers to pursue landlords for tenancy regulation breaches with implications for tenants' health.

Both students said their health had suffered as a result of living in the house.

''We have to go to the doctor often ... I've never been so sick frequently since we've been living in this house,'' Mr Thavaraja said.

''This is something that will make a huge difference to our students,'' she said.

''We have on some occasions asked the [Dunedin City] council to look at properties where we have concerns about the liveability, and sometimes we've been quite surprised at what is considered liveable.''

Some of the legally ''liveable'' flats had holes in the walls or floor, she said.

She said increased tenant powers included in the new rules were ''really important''.

''It will be interesting to get precedents set in tribunal as well, for [the sake of] future students.''

Mrs McKague, a PhD candidate at the University of Otago's centre for sustainability, said the new rules were ''a good thing'', but not good enough on their own.

Even fully insulated houses could be cold if they did not have proper heating or leaked heat in other ways, she said.

''Insulation is good if you have sufficient heating ... if the house doesn't have an efficient heat pump, it won't make much difference,'' she said.

''A lot of these properties are older properties with cracks and wooden window frames, so we need to think about these other measures that need to go with insulation.''

Compliance with the rules announced this week would be judged by tenant reports, which could also be problematic for students, Mrs McKague said.

A lot of students were worried about losing their tenancy, which meant they might be reluctant to complain, while international students ''might not be aware of the laws or how to go about making these complaints''.

The OUSA would be ''doing everything it can'' to inform members about the changes.