A surfer who carried out a dramatic rescue at St Clair Beach yesterday afternoon says someone will be killed unless the Dunedin City Council acts to make beach access safer. 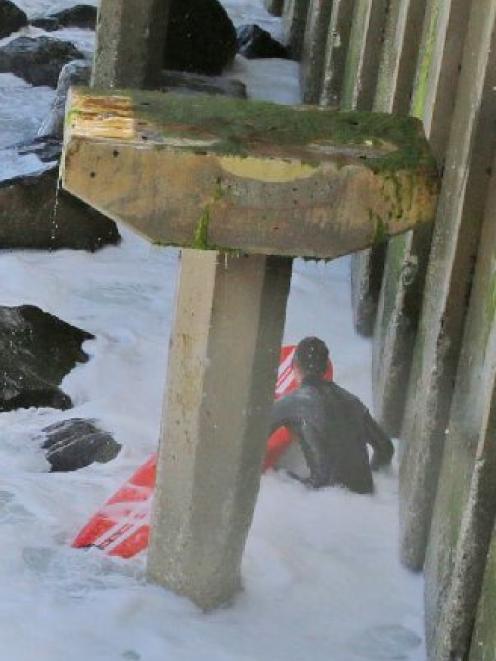 The surfer, believed to be a German tourist, gets pounded by waves below the Esplanade at St Clair Beach. Photo by Barbara Newton.
Dunedin surfer Jeff Patton is being hailed as a hero after he threw a rope to an inexperienced surfer being violently bashed against rocks and the wall at St Clair Esplanade around high tide yesterday.

Mr Patton said the surfer he rescued, believed to be from Germany, was only in the water for about five minutes before it became clear he needed help.

Having already gone to his car to get a rope with the expectation something would go wrong, he made his way partway down the stairs to the beach and threw out a rope to the struggling surfer.

The man, with the help of another rescuer, was pulled from the surf. He was ‘‘very lucky'' to have escaped uninjured.

‘‘It would have only taken one wave and he could have been dead, so he was really lucky.'' 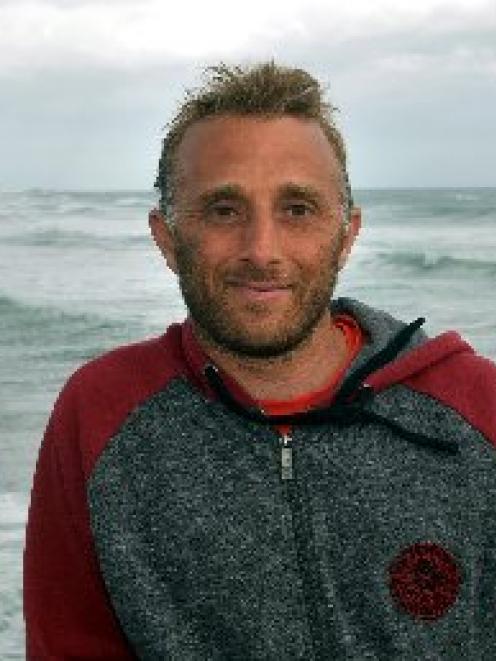 Jeff Patton at St Clair Beach where he rescued a surfer yesterday. Photo by Stephen Jaquiery.
He did not believe his actions made him a hero, saying ‘‘someone had to do something''.

The rescue was one of about 12 he had carried out at the beach in the past year and Mr Patton believed someone could die if nothing was done to make the beach safer.

‘‘I can't keep saving people. I'm not going to be there all the time.''The esplanade wall caused the sand to be swept away, making it very dangerous there.

He believed the council should use sand to create an artificial bar to stop waves crashing against the wall.

He said the dangers of the beach were highlighted again last night when he saw an experienced surfer, who came over from Australia for the national championships at St Clair this week, swimming to get his board after his cord broke.

The man turned back and abandoned his board when Mr Patton shouted at him that it was unsafe, otherwise he could have been in serious danger.

Scott James, who filmed yesterday's incident, said the man rescued was a ‘‘complete novice'' who had only begun surfing two weeks ago.

The man was warned before entering the water it was too dangerous. Mr James filmed the rescue so he could show the council and others just how bad it had got at the beach.

‘‘The council need to spend some money on righting their wrong.''

There was ‘‘no easy fix'' and the esplanade needed to be completely redesigned.

Witness Barbara Newton said Mr Patton was ‘‘definitely a hero'' for putting himself at risk to save the floundering surfer.

The rescued man looked like he had ‘‘no idea'' what he was doing and got ‘‘smashed'' a few times and stuck between rocks and the wall.

She was very surprised he escaped pretty much unscathed.

‘‘When I saw one wave smash him underneath the stairs I thought he was going to come up with limbs at odd angles.''

It believed the council could develop access next to the St Clair Hot Salt Water Pool, where a ramp could potentially be created.

Experienced surfers got in and out of the water at this spot.

Dunedin Mayor Dave Cull said yesterday's incident underscored the dangers of the area, but the council's approach to managing erosion was ‘‘appropriate'' and would not change in the short term.

‘‘We are not going to hastily rush in and spend millions of dollars to recreate a beach unless we know it's going to have the effect we need,'' he said.

‘‘We know it's dangerous and people need to be really, really careful.''

Chief executive Dr Sue Bidrose said the incident was an ‘‘awful thing'' and would prompt further discussion within the council about safety improvements.

‘‘We will definitely have a look at it ... safety is pretty important.''