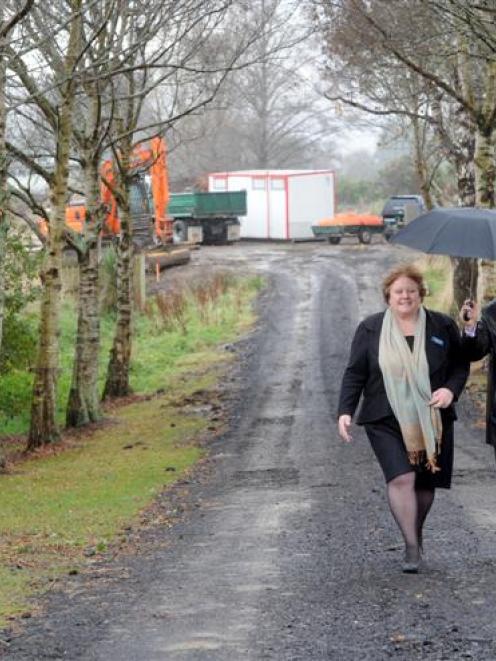 Dunedin Mayor Dave Cull and Summerset Group chief executive officer Norah Barlow need protection from the elements at the entrance to the company's retirement village being constructed off Shetland and Chapman Sts, in Wakari. Photo by Graig Baxter.
The plan had been for Dunedin Mayor Dave Cull to dig a hole at the Summerset Group's retirement home site in Wakari yesterday to symbolically launch the $40 million project.

But with a light dusting of snow on the hill suburbs and hail and sleet falling, it was decided to move the launch to a nearby hall.

It was a change of venue Mr Cull supported.

"I thought the ground might be under permafrost and I wouldn't get the spade in," he joked to an audience of Summerset staff and about 40 prospective residents.

When completed, the village will have 61 town houses, a 40-bed rest-home/geriatric hospital facility, 20 apartments and 20 care apartments offering assisted living. Communal facilities will include a hairdressing salon, residents' bar and cafe, lounges, doctors' rooms, a library, a bowling green and underground car parking.

Earthworks have begun on the 1.9ha site, which borders Balmacewen Intermediate School, and the first 30 town houses are expected to be completed by the end of this year.

Summerset chief executive Norah Barlow said afterwards it was hoped to have the village completed as soon as possible, but the timing of further stages would "very much depend on demand".

It was hoped the main building, housing the rest-home and apartments, would be started next year. 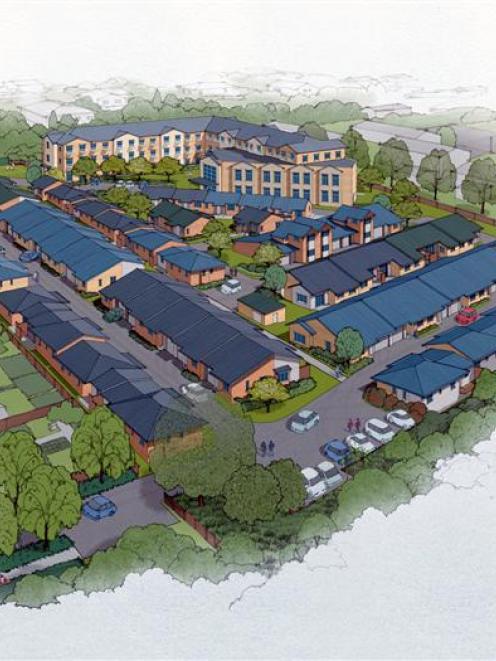 An artist's impression of the completed village. Image supplied.
"We intend to have this village finished as soon as possible.

"Usually, villages take up to seven years to develop - we want Dunedin finished in three."

At the launch, Mr Cull praised Summerset's concept of integrated care, offering a range of options from independent living to hospital-level care.

"Small, low-maintenance town houses particularly are in short supply, so [these] town houses will have an impact."

The development would also help Dunedin's construction sector at a time when workers were leaving for Christchurch because of a lack of projects here, he said.