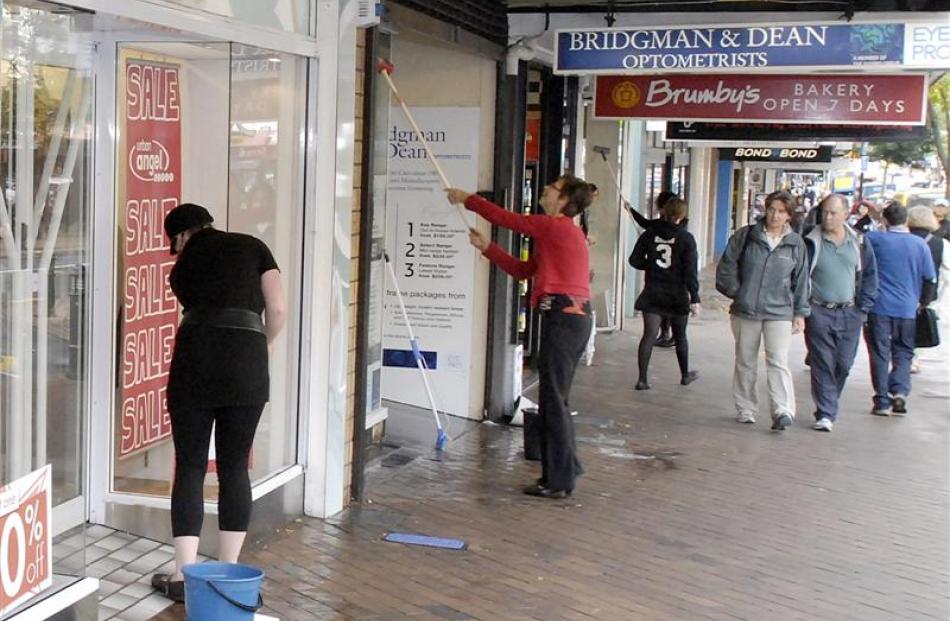 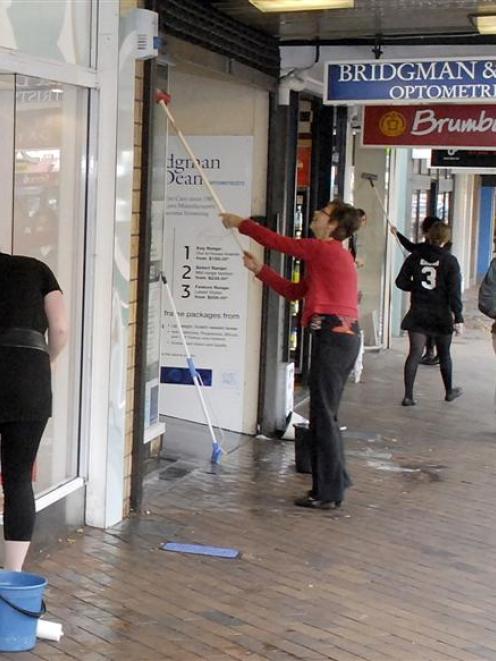 Urban Angel's Natalie Garner (22), of Dunedin, Bridgman and Deans manager Jenni Gillions and staff from Andrea Biani clean their shop-fronts. Photo by Gregor Richardson.
Angry George St retailers, who spent hours removing egg, blood, vomit and faeces from shop-fronts yesterday, are calling for the annual student toga parade in Dunedin to be cancelled and for the students association to pick up the cleaning bill.

City and university leaders have also condemned those responsible for the disorder.

"I think this is disgusting. I am holding the Otago University Students Association responsible for this and I will be sending them, not my insurance company, the bill for cleaning up this mess," Bezett Jewellers owner and city councillor John Bezett said following Tuesday's events.

Cr Bezett said the future of the toga parade would undoubtedly come before the Dunedin City Council, and he would advocate for its cancellation.

"The organisers should be ashamed of themselves."

His sentiments were endorsed by other retailers, many of whom had to close their doors for several hours while staff scrubbed the remains of the parade mayhem from windows, entrances and the footpath.

"This was just out of control. I don't understand how they can get permission to do this."

Meridian mall manager Michael Porter said the mall had to employ a professional cleaning company "to remove the pungent stench of faecal matter, vomit and urine from outside our doors".

The cleaning bill and repairs to smashed signs would amount to more than $1000 and the mall would be writing a letter to OUSA to recover costs, he said.

Tuesday's parade of 2000 first-year students resulted in bystanders pelting participants with eggs, windows being smashed and rubbish being thrown on to the street.

"It was not an ideal event," he said. "We don't condone this sort of behaviour."

Mr Darlow said it was too early to talk about cancelling the event, but the OUSA had begun a review to ascertain what went wrong.

Issues such as compensation for retailers would be discussed as part of the review, as would the number of volunteers involved in crowd control, he said.

Parade participants spoken to by the Otago Daily Times blamed much of the disorder on bystanders and said they "were simply victims of the violence".

It was unclear if the bystanders involved were students, Mr Darlow said.

Following the incident, students who were caught misbehaving would be dealt with by the proctor, and the OUSA would continue to work with police to "resolve any issues".

"The university has invested significant resources and energy into addressing the issue of student behaviour and - until yesterday - we believed there had been a major change of attitudes.

"This backward step is disheartening for all involved."

Dunedin Mayor Peter Chin said he was disappointed in what happened and "was waiting for the student association to work out what went wrong".

It was not the image the city wanted, he said.

While it was too early to discuss the future of the event, Orientation Week events would be discussed at a meeting of the North Dunedin Working Party early next month, he said.

Dunedin and Clutha area commander Inspector Dave Campbell said it was disappointing, with behaviour was worse than previous years.

"The toga party is a high-spirited event. We know there is going to be egg throwing but [on Tuesday] night, people lost control."

Twenty officers were on duty but even "if there were 10 times that number I don't know if the results would have been significantly different".

Three students were arrested on disorderly behaviour charges, he said.

Former Dunedin City Council events manager Islay McLeod, who organised the first of what is now the toga parade, is sad the event has become nothing more than "an initiation rite through a sewer".

Ms McLeod said the parade, which started in 2001, was initially called the first day parade and was created to welcome students the same way as graduands were farewelled.

It had gone from "scarfies to barfies in less than a decade. Well done."

As the clean-up progressed yesterday, See Through Windows owner Nick Beadle reported an increase in demand for his window cleaning services, "but cleaning egg isn't the easiest of jobs".

Usually called out to clean graffiti from city buildings, Graffiti Doctor owner Roger Knauf offered his service and water blaster free to some of the worst-hit businesses.

"These guys [business owners] are having a hard time of it . . . so I thought I would donate my time and the waterblaster to help," Mr Knauf saidAttempts to clean roads and footpaths by the Dunedin City Council were abandoned on Tuesday night because of the large number of people on the streets, council roading maintenance engineer Peter Stand-ring said.

Roads and footpaths would have to undergo further steamcleaning and the bill from the job, estimated in excess of $1000, would be "discussed with the university".