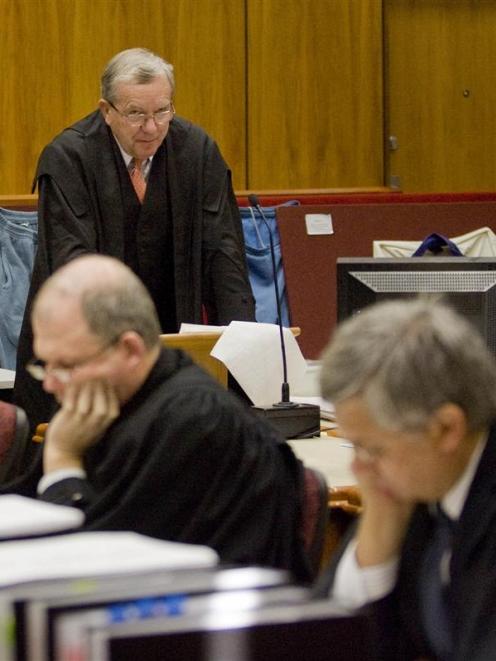 Michael Reed, QC, closes the defence case yesterday, with the Crown legal team (from left) Kieran Raftery, QC, and Cameron Mander, QC in the foreground.
Robin Bain cleaned himself up before committing suicide because he did not want to "meet his maker" while in "a fearful state with blood all over him", the jury hearing David Bain's retrial for the murders of his family has been told.

The Crown says 37-year-old David Bain shot his parents and three siblings then "framed his father" and that the fact there was no blood on Robin, apart from small amounts of his own, showed he was not the killer.

But in his closing address yesterday, defence counsel Michael Reed QC said evidence from defence scientists, and even one of the Crown scientists, clearly showed the 280mm bloody sock prints in Margaret Bain's bedroom and in the hallway of the Every St house were made by Robin, not David.

The prints measured 280mm and could not have been from David Bain, whose foot was 300mm long, whereas Robin's foot was 270mm in length.

And even though former ESR scientist Peter Hentschel believed a foot would leave a print smaller than its total length, that was not what tests by a defence scientist using David Bain's foot and a Crown scientist using his own 300mm foot showed, although the Crown scientist, Kevan Walsh, said a 300mm could leave a 280mm print if the extremities of the toes and the heel were not shown, Mr Reed said.

He reminded the jury that at Bain's first trial in 1995, the Crown said only the murderer could have made the prints - and that was David.

"Now they want to discredit their own scientist and the measurements he made."

The Crown argued that if the prints were indeed made by Robin, then why did his socks not have blood on them, but Mr Reed said Robin was depressed and irrational and "you can't attribute rational actions to an irrational person".

Robin was a religious person and "maybe he didn't want to meet his maker" with blood all over him.

He had probably slept in some of his clothes.

He was living in a cold caravan and it was the middle of winter so all he had to do to clean up was take off his jersey and some other clothing.

The green jersey the defence say Robin Bain was wearing was "covered in blood" and left with the dirty laundry which David Bain sorted "coloureds from whites" after returning from his paper round on June 20.

And that was how Bain's palm print, possibly in blood, came to be on the washing machine in the dark and dingy laundry.

"Can you imagine a murderer sorting the coloured from the whites - why would he do that, and we know he did," Mr Reed told the jury.

But he said, if David was the killer and was so keen to put items in the washing machine to get rid of the blood, "wouldn't he have put the white gloves in the machine? It makes no sense whatsoever."

Blood left on several door jambs in the house was at a height much more consistent with having been left by Robin, who was 1.75m tall, whereas David Bain was 1.92m.

And Mr Reed asked the jury to look at David Bain's clothing where blood was found and to consider his explanation for how it came to be there.

There was very little blood on the white T-shirt, where the Crown pointed to smears on the front and three areas of the back, and only a small area of blood on the crotch of his shorts.

That could be explained by David having gone into Stephen's room and kneeling beside him to see if he could help him.

If David had been involved in a fearsome fight with his younger brother, given the amount of blood in the room, surely he would have had more blood on him than what was found.

And if Bain had been in a fight and there was blood "flying around", why was it not on the top of the socks rather than on the soles from where he had walked in it, Mr Reed asked.

The blood issues were consistent with what Bain said had happened and Mr Reed asked, "Wouldn't it have been suspicious if he had no blood on him at all, if he was spotlessly clean?"There was nothing incriminating in the scrapings taken from David's hands but there was a substance that looked like blood on Robin's hands, which defence witness Dr John Manlove said looked like blood spotting.

Unfortunately, only one blood stain was sampled.

It was never tested and most of the samples were destroyed on the orders of the police only seven months after the first trial so "all the other stains went to the grave with Robin", Mr Reed said.

If one of those samples had been from any of the children, particularly Stephen, then the Crown had no explanation for how that blood could have got on Robin.

Modern testing could have shown the police were wrong accusing David Bain of the murders.

There was no suggestion the blood smears on Robin's hands had come from contact with his own wound and, as Crown pathologist Alex Dempster said, it would be "incredibly material" and would "change dramatically" his view of what happened if the blood on Robin was found to have come from one of the other family members.

David Bain's case had been extremely disadvantaged by the early destruction of the biological samples, Mr Reed said.

And he pointed to bruise marks on Robin's hand, believed to be about 12 hours old, and described by an experienced oral surgeon as consistent with teeth marks and dental trauma.

They were not checked and scrapings from under Robin's finger nails were not tested.

While the Crown pointed to the difference in size and strength between the protagonists in the fight in Stephen's room, Mr Reed suggested that, although the Crown described Robin as "frail", he was a fit man.

He would have been running on adrenalin.

If Stephen was fighting for his life, so too would have been Robin as he was "committed at that stage".