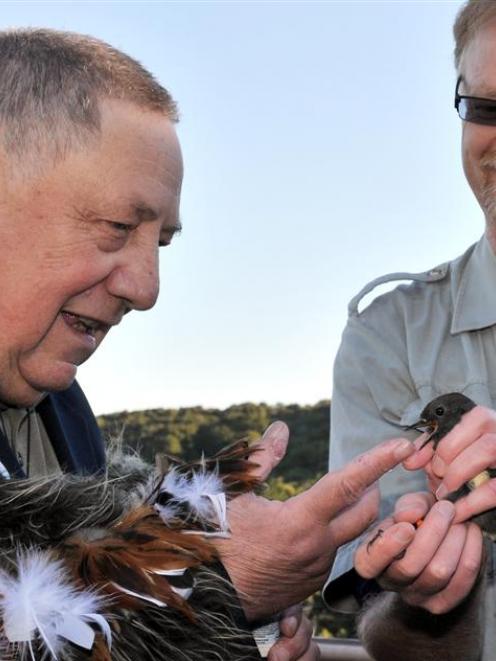 Yesterday, Huirapa Upoko (chief) David Ellison, of Karitane, blessed a robin to mark the assisted migration of up to 25 toutouwai from commercial forest plantations in Flagstaff and the Silverpeaks.

Otago Natural History Trust trustee Neville Peat said he considered the robins to be the "stars of avian entertainment" as they were known to be "unbelievably tame, to the point of hopping about people's feet".

"The Dunedin ones have a reputation for being a little shyer, so hopefully with the assistance of the predator fence ... they'll learn new ways to relate to people."

University of Otago associate professor of zoology Dr Ian Jamieson said the assisted migration from a nearby source population was an experiment and it was expected some, probably adult birds, would return to the forests.

"The ones which do stay and settle, with their breeding, the population growth will be exponential, as robins can have four broods a year."

Research on the Dunedin population had shown 70% of nests were lost because of predators, and of those that remained, only 20% of chicks survived, he said.

"They'll be much better here without nasty predators."

Dr Jamieson, with help from Orokonui's Elton Smith, would continue trapping robins during the next few days.

In recent weeks, they had been training the birds with meal worms to assist the process.

It had taken eight hours on Thursday to capture eight robins as there were so few in the forests.

The birds were also banded, sexed and had blood samples taken, so the men could monitor the robins that stayed or left and do population DNA analysis.

Ecosanctuary general manager Chris Baillie said there had been a good response to unguided walks at the ecosanctuary: 560 visitors had done them in the five weeks they had been an option.

Most of those were Otago people, while those taking guided walks were international visitors, she said.

Next weekend, the ecosanctuary would open the track to New Zealand's tallest tree, thanks to the hard work of the Rotary Club of Dunedin, she said.