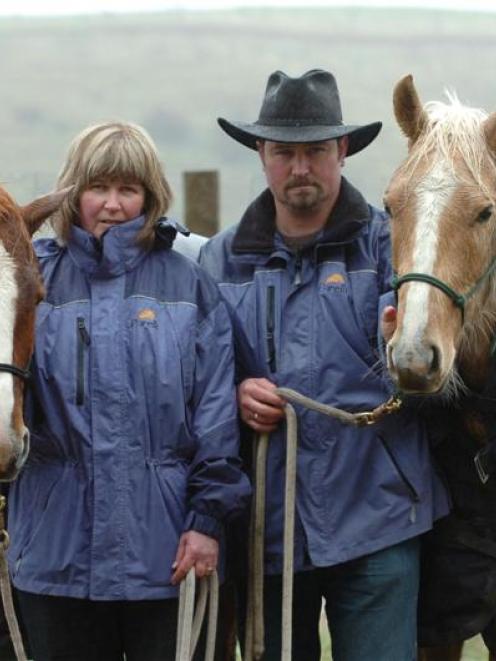 Nicky and Neil Rutherford with Solo (left) and River (right) yesterday. Another of their horses, Harley, was put down at the weekend. Photo by Peter McIntosh.
A horse was spooked by a passing truck on Saddle Hill during the weekend and had to be euthanased due to its injuries.

East Taieri horse owner Nicky Rutherford said she and her husband Neil were riding on Saddle Hill Rd on Sunday when a rental truck failed to slow down as it passed them.

Both horses were normally good with traffic, but the speed and noise of the truck scared Mr Rutherford's horse, Harley, so much, that the horse spun around and nearly caused Mr Rutherford to fall off.

"In the process of throwing a `spazz', Harley shattered his pastern [a bone in the lower leg] and a vet had to put him down.

"The truck driver must have seen, but he didn't even stop to help," Mrs Rutherford said.

"It's a horrible revelation of where society has got to."

The couple were devastated with the loss, as Harley was like a member of their family.

"We spend a lot of time with the horses. We spend every morning with them. Any time we have after work and on weekends is also spent with them. Our whole life revolves around the horses.

"Neil is having trouble talking about it.

Because Harley used to come up to the gate to greet him, he can't even walk past the paddock without getting upset."

Riders frequently took their horses out because riding around the same paddock became tedious.

It was good for horses to be ridden for longer periods with varied stimulation, she said.

Mrs Rutherford said she frantically tried to signal the driver to slow down, but to no avail.

The couple were angry at what they said was an increasing number of motorists who failed to drive with care past horses.

The sentiment was shared by "dozens" of horse owners on the Taieri who called to express their sympathy after the incident.

Retired horse trainer Hec Anderton said he rode horses between Wingatui and Whare Flat for most of his 40-year career.

But the "stupidity and impatience" of most drivers on today's roads meant the practice was no longer safe.

"I think 80% of drivers have no respect for a child on a pony. They think that stock shouldn't be on the road."

He and the Rutherfords called for more consideration from drivers.

"There will be someone killed one day - it's inevitable with the speeds they go past," Mr Anderton said.

Acting Senior Sergeant Ed Baker, of Dunedin, said horse owners had a right to ride their horses on the roadside and agreed drivers should take more care when passing.

"It's like small kids - you don't go hooning past them at 100kmh when you see them floating about the streets.

"If you see horses on the side of the road, you slow down, give them a wide berth and be defensive about your actions. Be ready to stop. It's all plain courtesy."