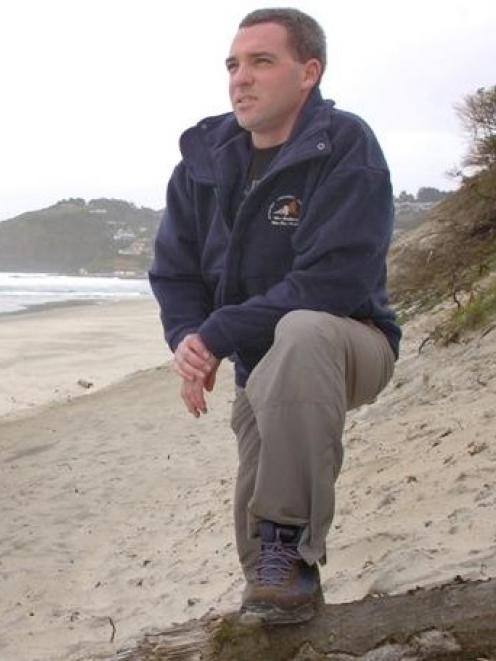 Shaun McConkey in his natural habitat keeping an eye out for sea lions. Photo by Peter McIntosh.
It was unexpected, but the New Zealand sea lion's curiosity and interest in humans won Shaun McConkey over.

He came to Dunedin in 1994, from Warkworth, keen to do his masters in marine science on dolphins or whales, but there were already enough students doing that work.

"It was by accident.

"There was this gap with sea lions and I've never looked back."

Mr McConkey was nominated for the award by Department of Conservation coastal Otago ranger Jim Fyfe, who said his common-sense approach and ability to offer assistance and advice on sea lions was highly valued.

It was a coincidence that the first year Mr McConkey started his research, the first pup in about 200 years was born on the Otago Coast.

"It's been really nice. She's followed me about the beaches. She has had pups and her daughters have had pups."

Sea lions were a nice animal to work with, he said.

"The thing about sea lions is that they are very very tolerant of people and are quite curious.

"It is not unusual for them to come up and approach you."

His research provided the first reliable estimate of the size of the Otago coast's sea lion population.

Since 1996, he had conducted monthly surveys of Otago Peninsula and Catlins beaches, recording sea lion numbers and maintaining a photographic database of recognisable individuals.

Since then he has maintained a family tree for Mum - Otago's sea lion matriarch.

He had continued the research voluntarily, while working full-time as a wildlife tour guide.

The work enabled him to get out into the sea lion's habitat every day, keep an eye on what was happening and help educate people, he said.

When he first started there were about 20 sea lions on the Otago Coast.

Numbers increased to about 40 three years later, and was now about 70, as young Auckland Island sea lions visited, breeding with the local female sea lions.

Education played a big part in his work with sea lions as he tried to help people understand how to behave around the animals, Mr McConkey said.

There had been instances of sea lions taking fish off the lines of fishermen, which most accepted.

However, some fishermen were not happy about it, he said.

To ensure education about, research into and conservation of sea lions continued, he had set up the New Zealand Sea Lion Trust.

With a website, plus Natural History New Zealand film students featuring sea lions in their work and an education programme being launched, he hoped people would learn to appreciate having the sea lions back along the coast.