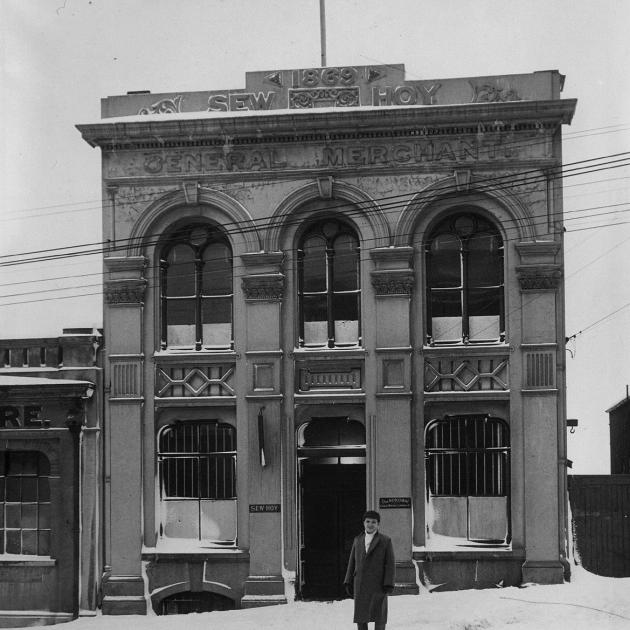 An unidentified person stands in the snow in front of the Sew Hoy building in Dunedin in the late 1930s. PHOTO: SEW HOY FAMILY COLLECTION
Dunedin's Sew Hoy building has been recognised as a Category 1 place on the New Zealand Heritage List.

As the only surviving example of what was an extensive network of Chinese retailers in Stafford St, in the central city, the building was significant to the history of Chinese in Otago, Heritage New Zealand,  listing adviser Sarah Gallagher, said.

“This is a really important building to add to our list.

"I have had so much support in researching this report from the Chinese community and heritage community.

"Everyone was really keen to see the Sew Hoy building’s amazing social and cultural history recognised".

In the mid-1890s, Choie (Charles) Sew Hoy commissioned a warehouse for his business at 29 Stafford St.

The Otago Daily Times published a detailed description of the building in June 1894, describing the “imposing stone and brick warehouse with a very handsome and pleasing appearance".

Mr Sew Hoy was a merchant, entrepreneur, innovator, and gold-dredger.

Born in Guangdong province,  he immigrated to New Zealand via Australia in 1869.

Through his business interests, philanthropic endeavours, and social connections, he became a leader in the Chinese community.

By 1871, Mr Sew Hoy was part of an established community of 96 Chinese merchants and storekeepers in Dunedin, inland Otago towns and in the goldfields, serving 4159 Chinese.

Toitu Otago Settlers Museum curator and co-author of the listing report, Sean Brosnahan, said the building was the last survivor in Dunedin of the series of supply chains of Chinese stores and merchants that made it possible for Chinese gold seekers to maintain a substantially Chinese lifestyle in the remote southern goldfields.

"They also acted as a conduit for information and funds to and from their home villages in China.

"This system of communication and supply was one the most remarkable features of the first phase of Chinese settlement in New Zealand." 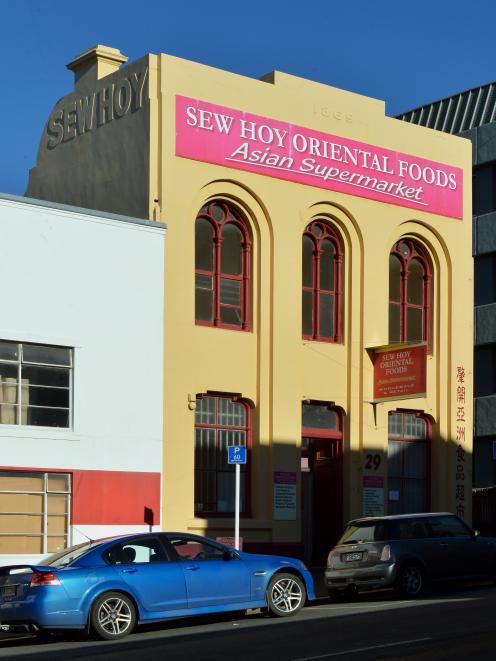 The building today. PHOTO: GERARD O’BRIEN
Choie Sew Hoy and his son, Kum Poy, were also successful gold-miners themselves and the building was the registered office for their Nokomai Sluicing Company, established in 1894.

When it closed in 1943, it was the last Chinese gold seeker operation in New Zealand.

The building was also connected to the Chinese cultural practice of organised repatriation of the remains of sojourner Chinese.

The society organised exhumations and the shipping of the remains to China from 29 Stafford St.

The last ship chartered to return the remains to China, SS Ventnor, sank off Hokianga in 1901.

The Sew Hoy family operated a store, as well as a clothing and food manufacturing business, from the building until the 1980s.