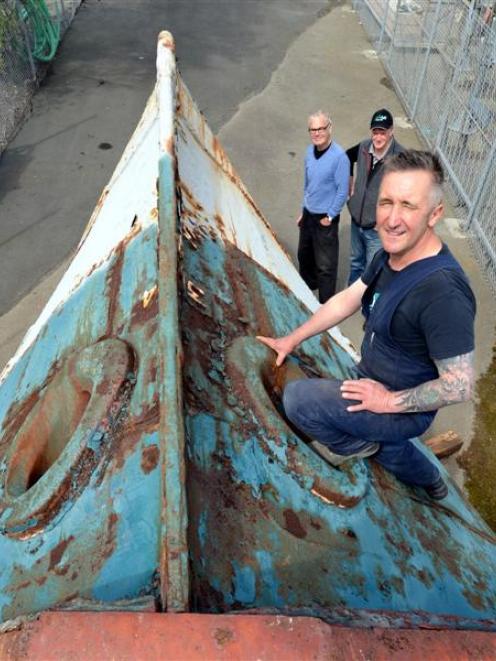 Zeal Steel owner Lawrie Forbes and sculptors Peter Nicholls and Stephen Mulqueen examine the bow of Te Whaka in Dunedin. Photo by Stephen Jaquiery.
Part of a 102-year-old derelict ship which rusted in Otago Harbour for 20 years may be transformed into a sculpture.

The barnacle-encrusted bow section of the former dredge Te Whaka was removed last week with the intention of converting it into an interactive sculpture beside Plato Restaurant, which was formerly a recreation centre for seafarers.

"It will sit on four pillars with a set of stairs around them.

"The plan is to have it facing up the harbour, so people can stand on the bow and do the scene from the Titanic movie," Zeal Steel owner Lawrie Forbes said.

"I'm going to use the ribs from the ship to make stairs."

Mr Forbes estimated the 10-tonne sculpture would cost him $50,000 to manufacture.

"We have to preserve these things. They're part of our history.

"I got the funnel, too, and I'll use that somewhere else. That funnel belongs somewhere in the city."

He has given Dunedin sculptors Peter Nicholls and Steve Mulqueen a tour of the ship.

"It has the potential for a stunning sculpture," Otago Sculpture Trust chairman Mr Nicholls said.

"It's perfect for a sculpture," Mr Mulqueen said.

Te Whaka is older than Titanic and was built in 1910 by Ferguson Brothers Shipyard, in Glasgow, for the Lyttelton Harbour Board, where it served as dredge until 1987.

The vessel was then laid up until 1993, when it was bought by the Te Whaka Maritime Heritage Trust in Dunedin. The Dunedin City Council contributed $50,000 towards converting it into a 120-passenger steamer for Otago's 150th anniversary in 1998.

However, subsequent fundraising efforts failed and the trust sold it to the Clevedon Steamship Company, in Auckland, in 2008.

The 324-tonne hulk sat in a near-derelict state at the Steamer Basin until two months ago, when Dunedin scrap metal recycling business Everitt Enterprises bought the vessel to scrap and recycle.

"Leon Everitt has been so helpful with this. He was really keen to see parts of the old girl preserved, too," Mr Forbes said.