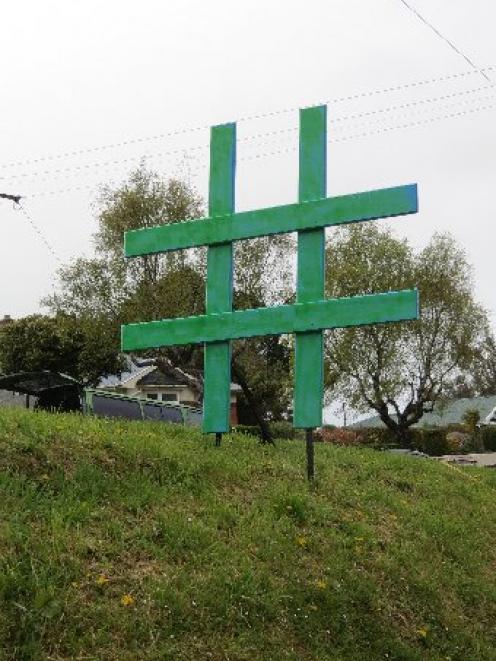 Gone green . . . Gigatown Dunedin supporters say they believe this previously blue Gigatown Dunedin hashtag was painted green by visitors from Timaru at the weekend. Photo by Jonathan Chilton-Towle
Rivalry between towns competing in the final round of the Gigatown Competition is heating up, with Dunedin accusing Timaru of what must be one of the most nerdy acts of vandalism ever committed.

Two giant blue hashtags, which were erected in Dunedin to raise awareness for the city's Gigatown Campaign, were vandalised during the weekend.

The hashtag in Portsmouth Dr was pushed over and the one near Pine Hill on the Northern Motorway was painted green.

Green is the colour of the hashtags used for the Gigatown Timaru campaign, so suspicions have been directed at our northern neighbour.

Dunedinites made it clear who they thought was responsible on the Gigatown Dunedin Facebook page.

''I reckon it was some Timaru supporters who were down at the beer fest in the weekend. #gigatowndun,'' wrote one.

''How sad if it was Timaru and they felt the need to do that #gigatowndunedin,'' another wrote.

''God Timaru needs to grow up and not ruin this competition, they obviously don't deserve gigatown #gigatowndunedin,'' another said.

Gigatown Dunedin promoter Josh Jenkins said the furtive sign-painting occurred on Saturday or Sunday. A post about the event had appeared on the Gigatown Timaru Facebook page, he said.

The post had quickly been removed from the page but Mr Jenkins had a screenshot of it which he sent to The Star.

The post had a photograph of the vandalised hashtag and read: ''It looks like our Southern Neighbours have started to support #Gigatowntim Great job Dunedin!''Mr Jenkins did not believe the act had been sanctioned by the official Gigatown Timaru campaign.

He was not sure if Timaru residents were involved in pushing over the other sign on Friday night and again on Monday night.

''I was a little bit gutted at first but we've got such a positive community that this has just made us stronger,'' Mr Jenkins said.

''I have the philosophy that if that kind of thing is happening then we must be doing something right.''

The Pine Hill hashtag would be repainted blue and the Portsmouth Dr hashtag was likely to be moved to another location, he said.

Mr Jenkins had not reported the vandalism to police.

When contacted by The Star, the Timaru Gigatown campaign leader did not wish to comment.