Silent disco lets you dance to your own tune 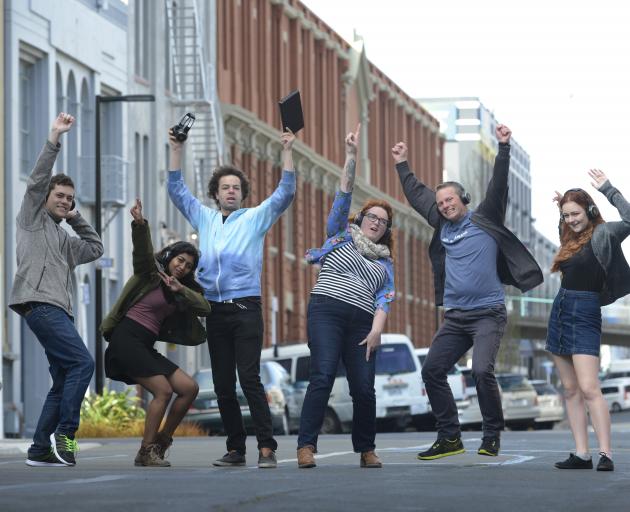 Rehearsing dance moves yesterday in preparation for the silent disco at the Vogel St Party on Saturday were (from left) volunteers Nicolas Zawadzki, Abinaya Saravanapavan, Lucas ''DJ Basswobble'' Ellwood, organiser Ann Cronin and volunteers Bartholomew Moth and Nadja Jury. Photo by Gerard O'Brien.
A party is being planned for hundreds of revellers to dance to three separate DJs playing three different sets in the same marquee.

But stand down, noise control; this party will rock in silence.

A silent disco is an event where people dance to music listened to on wireless headphones.

Rather than using a speaker system, music is broadcast via a radio transmitter and picked up by wireless headphone receivers worn by the revellers.

For the event, 300 pairs of headphones have been imported to make sure the party is pumping.

''If you're going to do something, you should go hard, shouldn't you?'' Ms Cronin said.

Each headphone has three channels available to listen to music through, allowing three separate DJs to broadcast concurrently.

The people wearing headphones can decide which channel to listen to.

People outside without headphones will hear no music but see a marquee - on the car park on the corner of Vogel and Water Sts - full of people dancing to nothing.

''It'll be hard to miss. We have a light-up dance floor and smoke machines - it'll be fun.''

At least 13 DJs will rotate to play two-hour slots to cater for different tastes in music. The range is for young and old, to bring the revellers together as a group.

''They can all dance together on the same floor and it'll be magical. When you put the headphones on you feel part of the group - it's going to be cool.''

She put on a similar event at a street party in Galway, Ireland, with 1000 dancers.

''Everyone in the street was singing - singing happens spontaneously because people can't hear themselves.''

When a DJ played a great song you could see the crowd react and ''ripple'' as people switched channels to join the fun.

Disco music was a blight on the Terpsichorean muse. Disco dancing, in group formation, is spectacular.