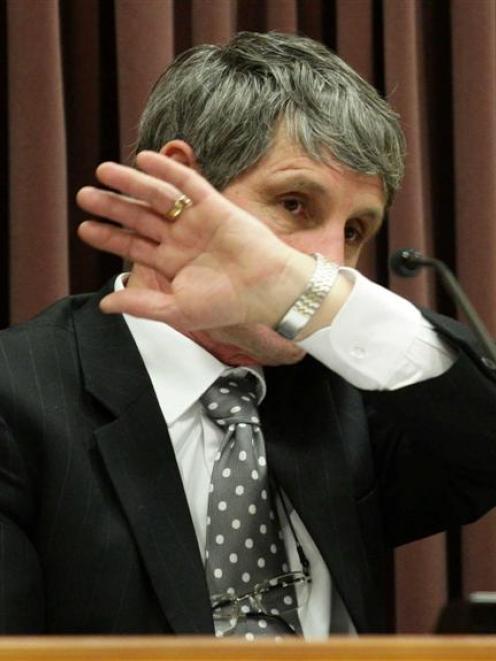 Christchurch-based pathologist Dr Martin Sage gives evidence yesterday in the High Court trial of Clayton Weatherston. Photo by The Press.
Dunedin honours student Sophie Elliott died from blood loss after she was attacked in her bedroom by her ex-boyfriend, the High Court at Christchurch heard yesterday.

Before Dr Sage gave his evidence, Justice Judith Potter warned the 11 jurors the photographs they would see were "unavoidably graphic".

She asked them to approach the evidence in a dispassionate and clinical way.

He admits her manslaughter.

Dr Sage said he arrived at the Elliott house, with Detective Hamish Barrons and ESR scientist Michael Taylor, about eight hours after the killing.

Miss Elliott's body was lying across a partly-packed open suitcase on the floor of the room.

She had multiple stab wounds to the head, face, neck, arms and lower body, and her white top and cardigan were heavily bloodstained.

When he carried out the postmortem the next morning, Dr Sage found 216 separate injuries, mainly stab wounds caused by a knife blade, with some inflicted with scissors.

There were also seven blunt force injuries where the skin was bruised but not broken.

He found Miss Elliott died from blood loss, two of the wounds to her chest having pierced her heart and one lung, while other injuries to her neck and throat had severed the main artery and the major vein.

Such wounds were "inevitably lethal", even with expert treatment, Dr Sage said, as they would cause "torrential bleeding".

Most of the wounds were in clusters, 11 in all, with an additional 35 wounds, including the blunt force injuries.

There was a scattering of classic defence wounds to Miss Elliott's hands and arms.

"Those indicate, unequivocally, the victim was alive and capable of some activity at least for the initial part of the attack," Dr Sage told the court.

The bulk of the injuries were intended to disfigure.

He said it was persistent because of the number of wounds and because the assault must have taken some minutes, and determined because, to inflict so many wounds, the attacker would have to continue with "purposeful activity for some considerable time".

It was focused because many of the wounds were directed at disfiguring the young woman, Dr Sage said.

Defence counsel Judith Ablett-Kerr QC said she had no questions for Dr Sage.