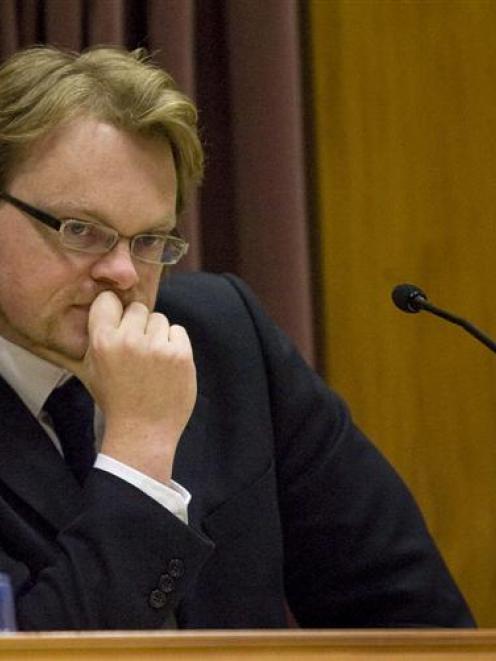 Murder accused Clayton Weatherston concentrates during proceedings in the High Court at Christchurch yesterday. Photo by The Press.
Clayton Weatherston denies deliberately targeting aspects of Sophie Elliott's physical beauty, although he accepts he killed her.

Asked what parts of Miss Elliott's body he found attractive, the 33-year-old former economics research fellow said the young woman did not have the kind of body he liked on a female.

"She was OK, but nothing specific attracted me to her.

"It was the situation, the whole package - I think it was her insecurity," he said in cross-examination.

He agreed he had a good memory.

When asked what specific things he found attractive about Miss Elliott, he said he thought her very forward and not his type when he first met her, although he grew to find her attractive because of her interest in him.

He thought she had some good energy but because she had so many issues about her appearance, he tried not to talk about it too much.

He "absolutely did not call her ugly", Weatherston said.

"Generically, she was attractive - she had good energy and I was flattered by her interest."

He denied that on January 9 last year he set about "damaging her looks and her features of physical beauty".

Asked why he had cut her hair, Weatherston said he did not know because he could not remember.

That was essentially also his reply when Mr Bates asked why he had mutilated her.

"You'd tell the truth if you remembered?" Mr Bates asked.

Weatherston said he was unsure how he knew the knife was beside Miss Elliott, but said he had deduced he had used the knife because of a cut on his hand.

And he definitely remembered the scissors, Weatherston said.

When he said he had not locked the door, that related to when Sophie was coming up the stairs and they first went into her bedroom to talk.

But he agreed he must have locked it at some stage, given it was locked when a police officer tried to come into the room.

And he agreed, if his print was on the door handle then he must have closed it and locked it.

Weatherston said his memory was "very contained to quite small pieces of information".

Memory was good when a person was not stressed and was in control, he said.

"To somehow relate that to this situation is quite tenuous," he told Mr Bates.

To a suggestion other people had given significantly different accounts of events in the days preceding the killing, Weatherston said he thought his memory about those things was "pretty good".

But he said "these things were upsetting to me".

"As I perceive what you're saying, Sophie's death simply would not have occurred had she not attacked you with some scissors," Mr Bates suggested.

"I think in some respects it was the straw that broke the camel's back.

It's a hard question to answer," Weatherston replied.