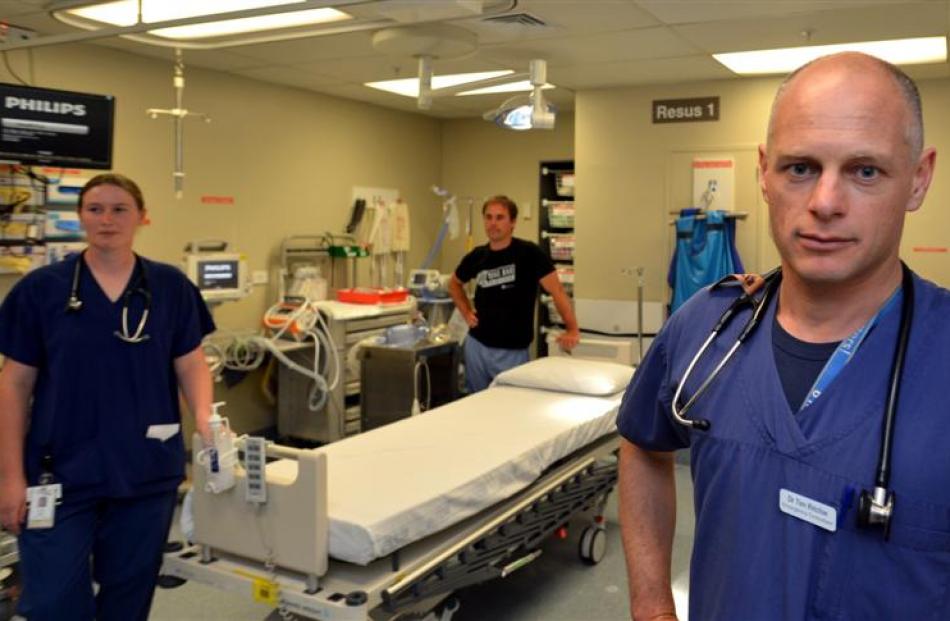 Dunedin Hospital emergency department staff (from left) Dr Nic Millar, Mike O'Brien, and Dr Tim Ritchie are concerned too many intoxicated people end up ''on our trolleys in ED''. Photo by Peter McIntosh.

Public Health South's 2013 alcohol report paints an alarming picture of hazardous drinking in the South, prompting a call for tougher regulations over the sale and distribution of alcohol. Health reporter Eileen Goodwin talks to the people at the front line, in our Booze Control: Stop and Think series.

''It's a pretty big thing when judges start commenting on social ills like that. What we're hoping is that local councils, when they're developing their local alcohol policies, will take note of those comments from the judiciary, as well as the comments [Public Health South] make.

''I think [the judges are] sick of it, and maybe they're aware of the opportunities that are coming up with the local alcohol policies, but maybe the issue is getting worse.''

The courts saw a ''fraction'' of alcohol related harm, but it was not possible to count or quantify its extent.

Rather than just reciting facts and figures, the public health unit asked health, community, and law enforcement workers for their on-the-job experiences.

The verbatim and blunt observations build a picture of hazardous drinking in the South, which the report describes as the country's worst.

An initiative in emergency departments had been to take a ''constructive'' approach to the problem, Dr Bell said.

For the past six months, ED patients in Dunedin and Invercargill have been asked about their alcohol use, regardless of the reason for their attendance.

If it happened on a monthly, weekly or daily basis, they were identified as being at risk of hazardous drinking.

''The idea is that their drinking habit is questioned.''

The person could then be referred to their GP or other support services.

Alcohol had become normalised, building an expectation it would be at every event or function.

''There is a normalisation, and in some sectors even a glamorisation, of alcohol-related harm where people think some quite major injuries are quite funny, because they happened as a result of alcohol.

''Like the kid who falls off a balcony and maybe gets away without serious injuries, but everyone has a good laugh about it.''

Prices should go up - ''alcohol has become extraordinarily cheap''.

More restrictions were needed - Dr Bell found the concept of personal responsibility fraught because alcohol was a dangerous substance that had become mainstream.

If introduced now, it would be subject to a very different set of controls.

''For us, as medical officers of health, we're responding to the population as if it was the patient, because that's what we do.

"The population is our patient, and the statistics are telling us that the population's got a bit of a problem.''

The Otago Daily Times visited the department on a Friday night shortly before Christmas.

Despite the festive season, the department was extremely quiet when the ODT visited about 10pm.

Dr Ritchie said the ''fairly dull'' night highlighted the impact of the students, most of whom had departed before the start of the festive season.

Drink was ''entrenched'' in New Zealand culture, and Dr Ritchie said he did not know the answer to that.

He was concerned that those presenting with alcohol intoxication were getting younger, and worried about the vulnerability of young women to sexual assault.

Too many intoxicated people were ending up ''on our trolleys in ED'', and he found their level of incapacity distressing, considering what might have happened to them.

Where patients were disruptive, staff were skilled at communication, and physical assault was rare. Many were injured as well as intoxicated, which made clinical assessments difficult to perform.

It was crucial to plan for student events such as the Hyde St party.

The 2012 event had been a ''disaster'' in terms of preparedness and the department was overwhelmed by presentations, Dr Ritchie said.

ED staff relied on communication from organisers, particularly about newer events that might not be on the radar of hospital staff.

The new alcohol screening questions surprised some patients, especially those who disagreed with the suggestion they might be drinking too much, Mr O'Brien said.

• Tomorrow: Why education programmes are not the answer