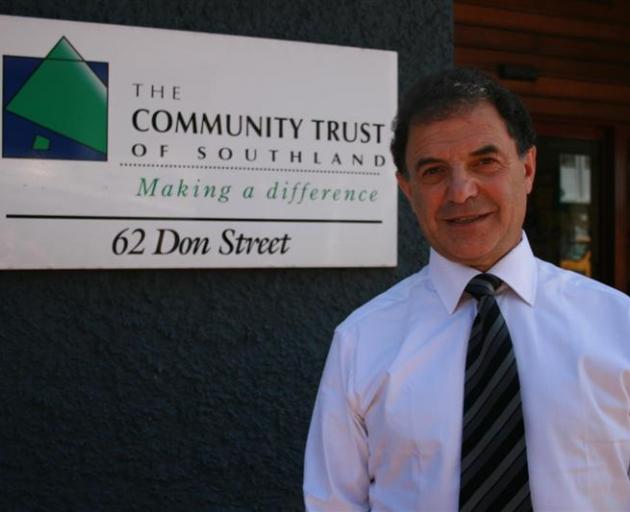 Malcolm Farry, of Carisbrook Stadium Trust, outside the Community Trust of Southland in Don St, Invercargill, last year. Photo by Hamish McNeilly
Stop the Stadium has dropped its Environment Court appeals against the district plan and roading changes necessary for the stadium project, just days before preliminary hearings were to begin.

The group's president, Bev Butler, yesterday said the cost of the appeal would have been at least $200,000, making it "imprudent" to continue.

Carisbrook Stadium Trust chairman Malcolm Farry, when contacted for response, said building may start earlier than expected now the appeal process apparently no longer stood in the way of the project.

"It's great for the city and the region."

The end of the appeal means the plan change to allow a new stadium and campus zone at Awatea St could be in place by early April. The appeal followed a decision in favour of the roading and plan changes after a two-week hearing in November last year.

Environment Court documents for a hearing on Thursday this week showed Stop the Stadium was the only opponent to the plan change. Port Otago's property division Chalmers Properties had earlier appealed the notice of requirement for roading changes in the area, and the University of Otago and the New Zealand Transport Agency were listed as "interested parties" in its and Stop the Stadium's appeals.

Chalmers Properties' appeal was still active yesterday, though the company indicated last week it would be withdrawing. An Environment Court spokesman yesterday said the court would meet on Thursday to see if the Dunedin City Council would be applying for costs from Stop the Stadium, and what Chalmers Properties intended to do.

Ms Butler said in a press release yesterday the appeal process had "blown out to become a four-week extravaganza that would have cost at least $200,000 of our members' money, and we now believe there are much more effective ways of ending the stadium debacle".

The group would look at other ways to stop the project, and planned a public meeting soon. She was not keen to elaborate on information in the press release, but said it was decided by the organisation's committee last Friday to cancel the appeal, after being told four weeks had been set aside for the hearing, and getting a quote from legal representatives.

She hoped to hear before Thursday the council would not be seeking costs, as the appeal had been withdrawn as soon as possible.

Mr Farry said the apparent end of the appeal was "another obstacle out of the way".

"It gives us the opportunity to get under way sooner than planned."

The trust was still negotiating with its main contractor, Hawkins Construction, to bring the cost of the stadium down, and was setting up meetings with the Government to organise terms and conditions for the $15 million in underwriting it last week promised to cover shortfalls in private-sector funding. A building start date had yet to be set, but Mr Farry said he hoped it would be late May or early June.

Council senior planner Paul Freeland said once the council was sure that all appeals were withdrawn, a report would be taken to the council to have the plan change approved under the Resource Management Act, and the operative date publicly notified.

"Potentially, the plan change could be approved at a special council meeting early next week, publicly notified on say Saturday, March 28, and then be fully operative by Monday, April 6."