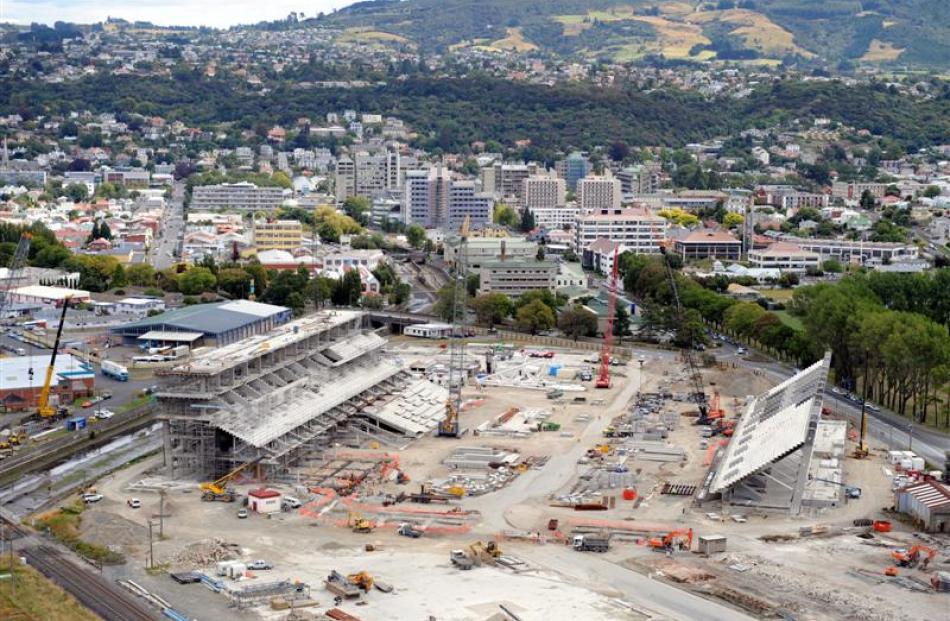 The Forsyth Barr Stadium this week, with the south stand on the left, the north stand on the right, and the University of Otago in the background. Some of the structural steel recently arrived from Auckland to make up the roof support columns can be... 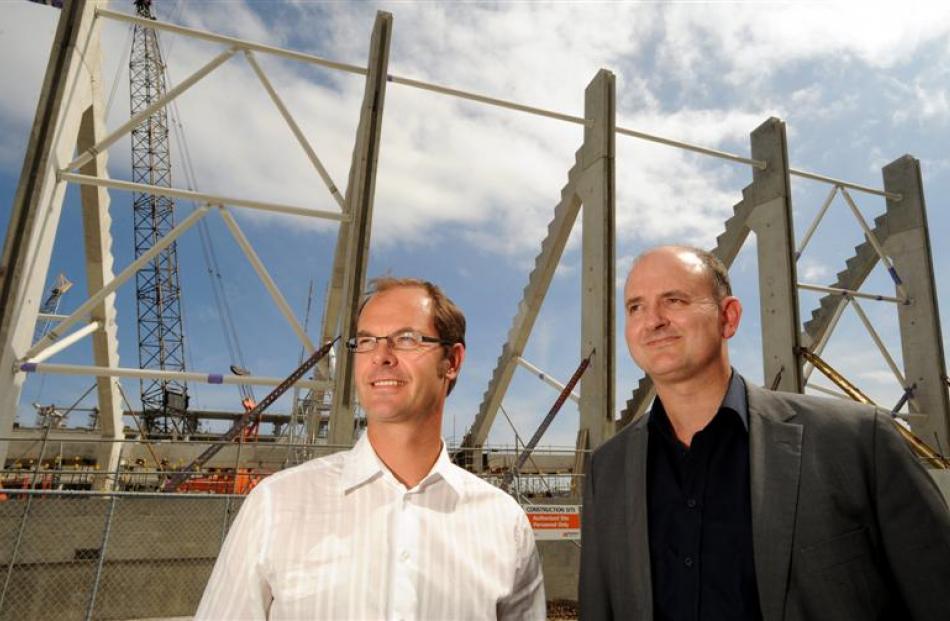 It may not be a surprise they hold these views - they did, after all, design the Forsyth Barr Stadium - but Richard Breslin and Marko den Breems think the building near Dunedin's waterfront is a winner. David Loughrey talks to the two men who took the stadium from an idea to a reality.

"This is about as good as it gets," Richard Breslin said, as he watched what had once been design drawings rise from the rubble of the former industrial area at Awatea St.

"One of the amazing things about this building, from across the whole world, it's the first there's been a fixed roof over a natural pitch.

"It gives a huge amount of functionality.

"It will change the way stadiums are seen in future."

Worldwide, stadiums attract the same kind of controversy that has dogged the Dunedin example, with public funding of facilities worth hundreds of millions of dollars often unpopular with the ratepayers or taxpayers, who end up footing the bill.

Also overseas, it is not uncommon for stadiums to be sold as "multi-use", or "multipurpose" as those public funds are sought, something pushed strongly in Dunedin during the planning process.

Asked why it was any better than any other indoor venue in Dunedin, Mr Breslin highlighted the economic aspect, something he said was "an essential part of the design process".

"The commercial viability of the stadium has always been of utmost importance.

"Simply put, the stadium has to generate as much revenue as possible.

"This is a standard requirement these days for all stadia and certainly not unique to Dunedin."

Explaining the thinking behind the design, Mr Breslin said there were two sides to the stadium issue, "the sporting side of things", or what happened on the grass pitch, and the space for functions, or whatever else the building was used for.

The client, the Carisbrook Stadium Trust, had been "very clear from the start it was not a sporting building, not [just] a rugby venue".

It needed to be able to cater for functions, conferences and other activities.

"We did a huge number of overlays looking at other uses - operating as a sporting venue is just one of those uses."

Asked what the new stadium had that backed up the multipurpose or "flexibility" tag, Mr Breslin said it was not just in the spaces that would be available for use at the stadium.

"The allowance for alternative uses typically involved provision for additional loadings, additional power and services to ensure the flexibility of these areas, rather than a spatial provision."

When the designers considered other uses for the east end, concerts for instance, they found they needed to allow for the lighting rig that goes over a stage.

"As a result, we have additional loading requirements for that part of the roof, fixing points to hang the rigging from, etc.

"From a design point of view, we tend to take the peak capacity required for a given area and work on that basis.

"For instance, for the east and west ends, the peak requirement was housing several thousand people at each end within these spaces.

"We would then review what was being developed, to test to make sure that other uses identified for those spaces would also operate with minimal operational expenditure.

"Those assessments sought to achieve an appropriate balance between operational and capital expenditure based on levels of expected usage."

Asked about the spatial aspect, Mr Breslin pointed to the "flat slabs" at the east and west end of the stadium.

"Obviously, for a big test, there can be seating in there," he said.

"But the beauty of the flat slabs is they can be used for any other activity."That could be anything from a big dining hall to exhibition space.

The university, with its input, could easily use those spaces.

Inside the stands of the stadium, space had been designed "very, very carefully" for different uses, so 50 or 60 people, for instance, could use an area for a conference or a fashion show.

Past reports on the stadium show the south stand has a variety of room capacities, from suites that hold up to 24 people to a 450-person bar, and 1000-person lounges.

Mr Breslin said it was also important locals were able to use the building, and that it functioned as an asset for the city.

Asked, as trust chairman Malcolm Farry and Dunedin Venues Management Ltd chief executive David Davies have been, if the design of the venue had changed since the start, Mr Breslin said it had not.

"Really, nothing has changed."After all the processes of advancing the design, he said, "fundamentally, it's the same building".

Mr Breslin said there had been "quite a shift" in stadium design in the past five to 10 years.

In the past, stadiums had been viewed as "functional, utilitarian" buildings, instead of an asset for a city.

Another change was a move to open up the use of stadiums, changing them from a venue "for 18 to 40-year-old males drinking beer", to more family-oriented venues.

A key change, Mr den Breems said, was in how buildings integrated with what was around them.

For the Dunedin stadium, it was the way it opened on to the University of Otago's plaza, allowing it to be used every day of the week.

The temporary seating areas, which would be attached to scaffolds, added to the stadium's ability to cater for different events.

"We just think it's fantastic."

Based in Auckland as principal, responsible for New Zealand projects.

Worked on the new Wembley Stadium, led design team for two stadiums built in Portugal for the Euro 2004 football competition.

Project leader for master-plan for the London 2012 Olympic Park.

Manages team designing the redevelopment of Eden Park for the 2011 Rugby World Cup.

Projects include Akoranga campus, reception and administration building and campus learning centre at the Auckland University of Technology, technology building at the Manakau Institute of Technology, Waikato and Thames Hospital, and Wanganui Hospital.