Stadium dressed to impress ahead of opening 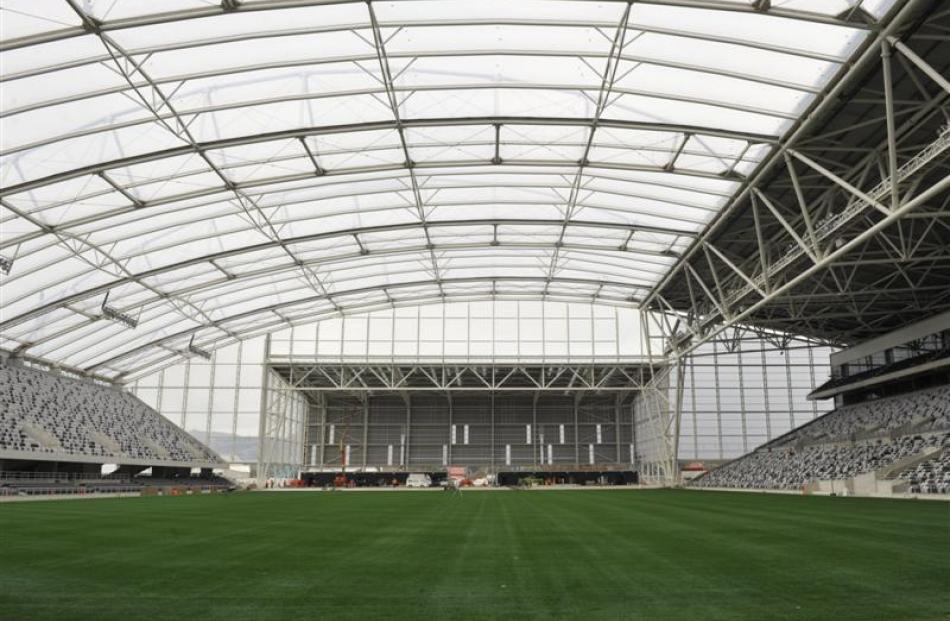 The view from the stadium's western end with the south stand to the right and the north to the left. The western and eastern ends provide open space for temporary seating or alternative uses. Photo by Peter McIntosh.

It is a long way up from the ground to the roof of the Forsyth Barr Stadium.

When you stand on the western edge of the grass playing surface, the stadium's cavernous interior is truly a sight to behold.

And, after climbing stairs to the highest seat in the stadium's south stand, your uninterrupted views of the playing surface down below could easily be those from a helicopter.

For what has been referred to as a boutique stadium, it seems both immense and intimate at the same time.

The centrepiece is a lush, dark green paddock of grass, neatly clipped and waiting, framed by intimidating cliffs of seating to the north and south.

Claims rugby balls hoofed into the air would be ricocheting off the roof seem dwarfed by the sheer scale of the project, capped by the plastic and steel roof soaring high above.

All that is needed is a lick of white paint and some goal posts, and the "centre bowl" - the playing surface and stands - will be ready, Carisbrook Stadium Trust chairman Malcolm Farry, conducting the tour, says.

It is, he says proudly, essentially finished.

As if to underscore the point, a worker in a high-visibility vest makes his way slowly across the south stand, adding the finishing touches.

He moves from seat to seat with a brush and shovel in hand, sweeping each for dust and then moving on.

High up on the fourth level of the south stand, two members' lounges also remain a work in progress.

Sinks lie on the floor, bars and dining facilities are absent and small piles of building materials are scattered about.

Mr Farry makes no secret of the long hours workers are putting in each day, or the project managers' seven-day weeks, to complete the internal fitting out on time.

At the end of it all looms completion date, just seven weeks away on August 1.

Mr Farry remains as confident as ever about meeting that deadline, but acknowledges the challenge the two-year construction project has been.

"I don't want to make it sound easy. There are a lot of people working very hard to make sure we do complete on time," he says.

However, he emphasises, come August 1, all signs of construction will be gone and the stadium ready to impress all but the most ardent of critics.

"You can't take the smile off our faces, and I have been in here plenty of times. I still find the experience and the view quite exhilarating, and I can't wait for it to be full of people."

The Forsyth Barr Stadium will be open to the public from 11am until 2pm today. Access will be by gold coin donation, with proceeds going to the Otago Medical Research Foundation.