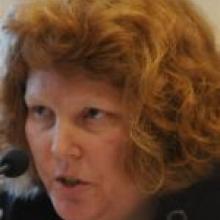 Elizabeth Kerr
The Dunedin City Council is defending its procedures after being threatened with a judicial review over rushed road closures and restricted access to the Water of Leith around the Forsyth Barr Stadium site.

The streets - Leander St and parts of Parry and Magnet Sts - are to be closed to motorists in stages over the next five weeks while a new road and level crossing is built to provide continued access to boating facilities and industrial buildings on Magnet St.

Ms Kerr told the Otago Daily Times the road closures should have been the subject of public consultation "as best practice".

Restricted public access to the Water of Leith inside the stadium construction site "has not been a public process either", despite the council's district plan rules requiring access to be maintained, she argued.

She believed the access restrictions could be challenged through a judicial review, and the road closures through "some other process".

Ms Kerr said she was waiting for a response from the council before considering her options.

"That could be something that could bring them to a grinding halt. . . legally," she said.

"There are some matters there, without a doubt."

Mr Harland could not be contacted, but council city environment general manager Tony Avery yesterday defended the council's handling of the road closures.

The roading changes, restricted access to the Water of Leith and wider plans for the stadium site had all been publicly notified as part of the stadium plan-change hearings held in November last year, he said.

"It was abundantly clear what the council's proposal was in respect of the site," Mr Avery said.

He conceded temporary road closures - normally used for parades and other events - had been granted to contractor Hawkins Construction to allow construction to begin as soon as possible once it was confirmed the stadium project was to proceed.

However, the legal process to permanently stop the roads followed within days, and was now complete, he said.

That process was undertaken under the Public Works Act and did not require further consultation, Mr Avery said. The changes meant the old roads legally became part of one lot to be used for stadium construction.

Council transportation planning manager Don Hill said the public could now legally be excluded from the roads, but limited access would continue until the new access road to Magnet St was completed, which was expected to occur by July 1.

The stadium plan change also allowed for public access to the Water of Leith "esplanade reserve" to be restricted along the length of the stadium site, for safety reasons, during construction, he said.