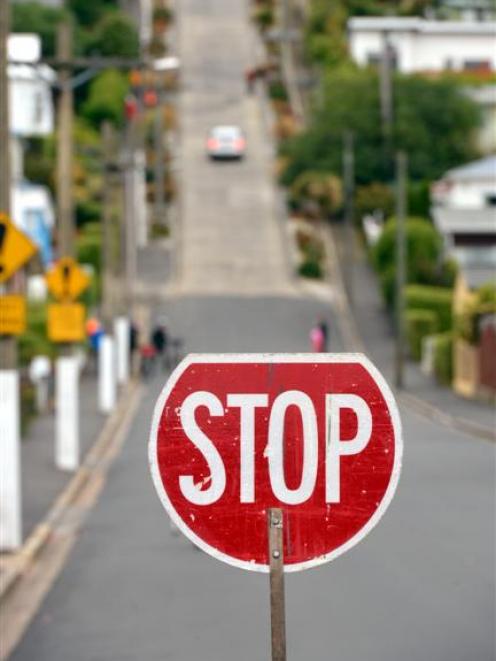 The secret advertisement being shot for a Korean car manufacturer in Baldwin St, Dunedin, yesterday. Photo by Stephen Jaquiery.
If you want to put a new car through its paces, then the world's steepest street is a good place to do it.

Baldwin St, in Northeast Valley, was the challenging launching pad for a new Korean car yesterday. The location was chosen to illustrate the power of the new diesel vehicle, location scout Daz Caulton, of Queenstown, said.

''All the Baldwin St residents have been fantastic about having us here,'' he said.

''We're trying to develop the Korean film industry in New Zealand and Dunedin is known as a very film-friendly city.''

The Otago Daily Times was asked not to reveal the brand, or show detailed photographs, of the new car.

The advertisement includes a scene where dozens of inflatable balls are released, to demonstrate the steepness of the street, and also features a couple of locals, donkeys Wilbur and Sundance, from Hare Hill Horse Treks, in Port Chalmers.

''It's the first time they've done anything like this,'' manager Oliver Goldsmith said.

''They're not exactly film stars.''