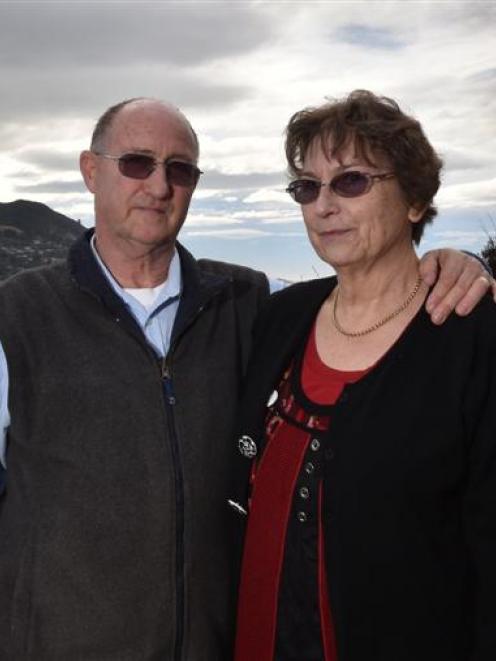 Steve and Lorraine Hawkins
The couple at the centre of a long-running battle with the Dunedin City Council over stormwater problems on their Otago Peninsula property say they may reconsider negotiating a deal.

However, Steve and Lorraine Hawkins, of 240 Portobello Rd, say the council's suggestion it could use the Public Works Act to acquire their property was ''not unexpected''.

''They've threatened us with that before ... It's just bully tactics,'' Mrs Hawkins said.

The Hawkins said they would meet their lawyer next week to have another discussion about entering arbitration with the council to try to reach an agreed settlement.

The pair remained wary of arbitration while the two parties' land valuations were $440,000 apart.

Despite that, Mrs Hawkins feared an acquisition under the Public Works Act could result in an even smaller payout than the council's valuation.

Mr Hawkins said he was ''not interested'' in arbitration if the council stuck to its valuation as a starting point, but that would be discussed at next week's meeting with the couple's lawyer.

''We will have arbitration, but it has to be fair,'' Mr Hawkins said.

The comments came after council water and waste group manager Dr Laura McElhone suggested on Tuesday the council might use the Public Works Act to acquire the couple's land if an agreement could not be reached.

That followed Monday's warning from the Otago Regional Council it could take enforcement action against the DCC through the courts if the situation was not resolved soon.

Yesterday, it was also confirmed a top-level meeting of ORC and DCC staff - including ORC chief executive Peter Bodeker, DCC chief executive Dr Sue Bidrose and other senior managers - would be held this afternoon.

ORC director of policy planning and resource management Fraser McRae, who would also attend, said he expected a ''top to bottom'' discussion of stormwater issues at the property.

''I'd like to think they [DCC] have some idea of what they're going to do, and a timeline for what that will be and involve, to get to some fruition.

''Obviously, it relies on the other party, as well, to get an agreement at the end of the day.''

Dr McElhone, in a statement, said today's meeting with ORC staff would ''discuss progress on the issues'' at the property.

It was ''pleasing'' the Hawkins had indicated they could reconsider arbitration, but she denied the council was using the Public Works Act to bully the couple.

''Consideration of the Public Works Act is simply the council looking at what remedies are open to it to resolve the infrastructure issues that exist around the drainage issues associated with the property.''

She said the offer to enter arbitration had been on the table for ''some weeks, and we are keen to begin progressing the matter''.

The Hawkinses blamed the DCC for an increasing torrent of stormwater coming through their property from new homes above them in Waverley, which they said had caused slips and other damage.

The DCC was allowed to discharge stormwater from the Waverley homes into a watercourse running through the Hawkins' property, but only if it did not cause flooding, erosion or land instability.

The DCC has refused to accept liability but insisted it has gone to ''exhaustive'' lengths to try to resolve the dispute, including offers to fix the problems or buy the property, without success.