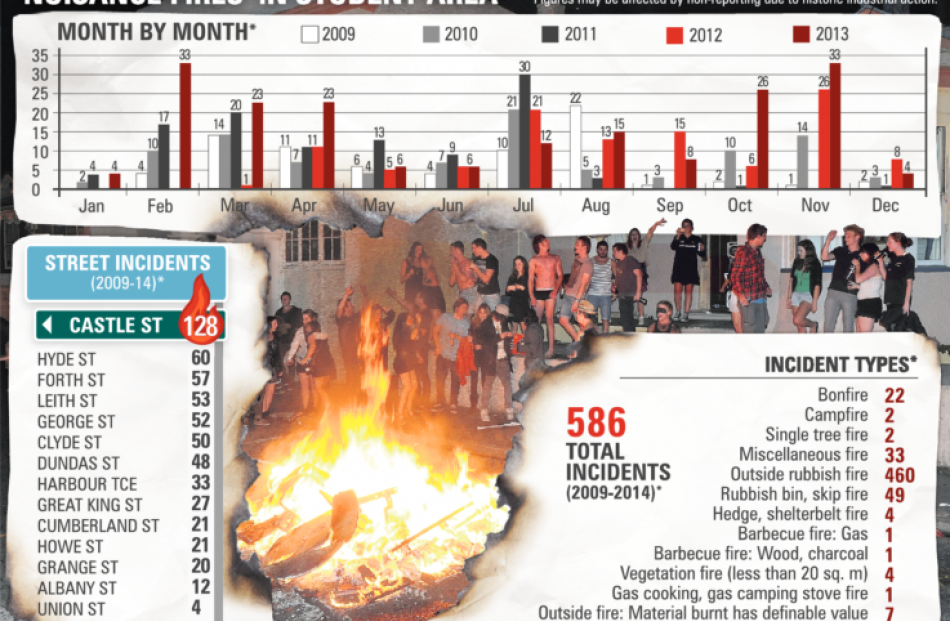 To dampen fire threats, the Fire Service, police, University of Otago and Dunedin City Council have taken a zero tolerance approach to such fires in the city.

During the start of the academic year, 27 fewer incidents were recorded compared with the corresponding period the previous year.

Figures released under the Official Information Act show the Fire Service recorded 586 nuisance fires in the North Dunedin student area between February 20, 2009, and February 20, 2014. Of those, 179 were recorded last year - compared with 77 in 2009.

The majority of fires were recorded as ''outside rubbish fire'', followed by rubbish bin/skip fires (49).

Mr Voight said these types of fires could cause injury to those who lit them, posed a risk to members of the public, caused property damage and tied up valuable emergency services resources, ''hence the multi-agency approach''.

''All agencies are now making it clear that students and others who are involved in deliberately lighting fires will be prosecuted,'' he said.

''If convicted, they will carry a criminal record with them for life and this will affect their work, travel and job prospects.''

Over the period, July was the biggest month for fires, with 94 recorded, followed by November (74) and March (72).

Mr Voight said staff promoted fire safety during Orientation Week, ''warned of the consequences of deliberately lighting fires and visited students and others living in the most affected areas''.

Last year, the University of Otago proctor dealt with 43 students who wilfully set fires, with a further eight students referred for fuelling fires.