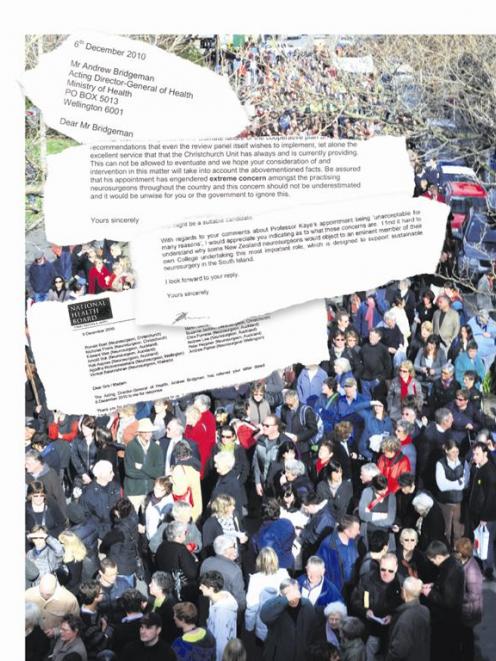 While Otago and Southland breathed a sigh of relief after the announcement last November that neurosurgery would be retained in Dunedin, many in New Zealand's neurosurgery community remained unhappy. Correspondence released to the Otago Daily Times shows how the battle raged on behind the scenes. Elspeth McLean reports.


Some New Zealand neurosurgeons thought they should have been left to develop neurosurgery services throughout the country, and did not want Australian neurosurgeon Prof Andrew Kaye involved in South Island planning.

This is shown in emails and letters released this month by the National Health Board, and written about a month after the decision was made to offer neurosurgery in both Christchurch and Dunedin.

The neurosurgeons were unhappy about the two-site proposal, which they described as not dissimilar to the situation that had existed from 1981 when the Christchurch unit began.

Three neurosurgeons left the Dunedin unit because of inadequate neurosurgical workload and the "de-skilling and lack of professional development" resulting, they said. In a way, the academic unit proposed by the panel, which would give two of the three neurosurgeons in Dunedin academic duties, was trying to "reinvent the wheel".

The Dunedin service, while diligently serving the population of the Southern board area, had failed to "stand the test of time", despite the presence of a similar number of staff as suggested in the new proposal, the letter said.

The 13 neurosurgeons, from Christchurch, Hamilton, Wellington and Auckland, said Prof Kaye's appointment was seen in the neurosurgical community in New Zealand and Australia as "perplexing and unacceptable for many reasons".

It could only lead to the ultimate failure of the co-operative plan and recommendations of the panel, they said in a letter to acting Director-general of Health Andrew Bridgman last December.

The "extreme concern" about Prof Kaye's appointment among practising neurosurgeons throughout the country should not be under-estimated and it would be unwise for the Government to ignore it, the letter said.

Among the signatories was Canterbury neurosurgery head Martin MacFarlane who, three months later, was appointed clinical director of the new South Island-wide service.

In an email to Prof Kaye in early December, Mr MacFarlane told him he and his Canterbury colleagues did not agree with the expert neurosurgery panel processes, many of its recommendations, and Prof Kaye's involvement, "especially as chairman".

There had been no opportunity allowed for clinical leadership by New Zealand neurosurgeons, something which was of concern to more than just neurosurgeons from Christchurch, the letter suggested.

In a later letter to deputy director of the National Health Board Michael Hundleby, Mr MacFarlane spelled this out in more detail, saying the neurosurgeons in New Zealand and the neurosurgery units had not been given an opportunity to develop their inter unit and inter collegial relationship in terms of planning neurosurgical services in New Zealand.

"We are quite capable of doing this and wish to do so."

He outlined the background to a neurosurgical clinical network proposal put forward early in 2010. The proposal would have had this development role with a funded chairperson with executive and analytical support. Such a clinical network was required, but it did not require input from overseas neurosurgeons.

The recommendations of the expert panel, and most particularly the set-up of the governance board "chaired by this Australian neurosurgeon is not the way to do this", he wrote.

Mr Hundleby, asked this month about the status of the clinical network proposal, said it was considered the South Island service should "get up and running first".

Now Mr MacFarlane was in the position as clinical director of the South Island service "we intend to revisit whether the time is right".

In a separate long email later to Mr Hundleby, he suggested the appointment of Prof Kaye would be likely to lead to the destruction of the Christchurch unit.

He suggested there was "a long history involved here which better be discussed in a more appropriate format and not over email".

However, Mr Hundleby said this month Mr Boet had not followed up requests to outline any concerns about Prof Kaye.

Mr Boet, asked this month what those concerns were, why he did not pursue them, and whether he still had them or if his thinking had changed, did not directly answer those questions.

In an email response, he said the comments had not been made by himself as an individual but by the neurosurgical staff in New Zealand in general.

One of the main concerns about representation of clinicians involved in providing the neurosurgical service had been addressed by the appointment of Mr MacFarlane and involving Martin Hunn in the process. (Mr Hunn is a Wellington neurosurgeon who is the independent neurosurgeon on the governance board. He did not sign the letter to Mr Bridgman.)

Regarding Prof Kaye's involvement, Mr Boet said there had been a constructive meeting with him before the governance body assembled and "we have been able to move forward" in trying to establish a workable service.

"This is not an easy task with many hurdles to cross, but the positive involvement and input of all parties including the press will ultimately benefit this process."

Prof Kaye, asked how he and Mr MacFarlane had been able to resolve differences, said from Melbourne there had been "huge heat" in the debate over the future of the neurosurgery service for years.

Prof Kaye said Mr MacFarlane, whom he had known for years, was a straightforward person who had always acted courteously and respectfully in his dealings with him. After the decision last year they had a series of discussions about what was planned and what could be done. Mr MacFarlane had listened to what he and others said and could see the possibilities.

"He genuinely changed his view," Prof Kaye said. "He saw the good, the bad and the ugly in it all and took it on and supported it." He did not have to be persuaded to bring his "considerable talents" to the clinical director's job and had taken to the job with "enormous enthusiasm".

Prof Kaye said his relationship with Mr MacFarlane was excellent and he expected that would continue. He knew many of those who had signed the letter and had spoken to most of them since. He was of the view they had signed the letter to be supportive of Mr MacFarlane at a time nobody was sure what was ahead. He considered they were supportive now.

Enormous strides had been made very quickly once people sat down and were able to "look at the whites of each other's eyes".

Prof Kaye said he had been pleasantly surprised at the response to the advertisements for both of the Dunedin neurosurgeon positions advertised so far.

Mr Hundleby described Mr MacFarlane as having had "a road-to-Damascus experience".

The key to implementing the recommendations of the expert panel was having the right people.

Prof Kaye was the ideal choice for chairman and being able to appoint Mr MacFarlane as clinical director had meant progress could be made in a way which would have been difficult if there had been continued animosity, Mr Hundleby said.

Mr MacFarlane and Prof Kaye were clearly working well together, he said.

The neurosurgeons' December letter showed they were displeased they did not have the opportunity to review and comment on the panel recommendations before their publication.

They described the service's proposed governance board as made up of a "group of aliens/outsiders and administrators" with little understanding about the needs of providing a "modern neurosurgical service to international standard in the South Island".

The process followed by the expert panel was flawed because there was little involvement of New Zealand's practising neurosurgeons, and this had resulted in a disconnect between specialists and others involved in the planning.

Mr Boet, in a long and not always coherent email to Mr Hundleby, expressed concern at a slant towards Southern Health Board/Southland/Otago University representation, leaving him with "little trust that common sense will prevail in its decisions".

He called for appropriate representation of neurosurgeons involved in both Dunedin and Christchurch and that the board be led by a New Zealand neurosurgeon.

He was also critical of the appointment of the implementation manager Joy Farley "a lady from Invercargill whom admittedly is currently working in Taranaki".

In reply Mr Hundleby said the panel was very aware of the animosity between Dunedin and Christchurch on the issue and made a deliberate decision that, at least for the next couple of years, the service needed to be governed by an independent board.

The board would contain two neurosurgeons, and be led by one of them, meaning it was very consistent with the Government's desire to have clinicians more involved in planning and leadership.

In a covering note to the correspondence released this month, Mr Hundleby said there was obviously a high level of anxiety at the time it was written but the board had since made significant progress under Prof Kaye's leadership.

Southern District Health Board chief operating officer (Otago) Vivian Blake agreed, saying any tensions "early on in the piece" had been left behind, and good progress was being made.

Dunedin clinicians had been welcoming of Mr MacFarlane - all were "on the same page", she said.

Asked for comment, Mr MacFarlane issued a one-sentence statement advising " we are all working to provide high quality neurosurgery for all South Islanders".

Prof Andrew Kaye:
His appointment as chairman was seen in the neurosurgical community in New Zealand and Australia as "perplexing and unacceptable for many reasons", and could only lead to the ultimate failure of the co-operative plan.

Andrew Bridgman:
The acting Director-general of Health received a letter from practising neurosurgeons expressing "extreme concern" about Prof Kaye's appointment warning that this should not be under-estimated and it would be unwise for the Government to ignore it. Among the signatories was Canterbury neurosurgery head Martin MacFarlane who, three months later, was appointed clinical director of the new South Island-wide service.

Martin MacFarlane:
In an email to Prof Kaye in early December, Christchurch neurosurgeon Mr MacFarlane told him he and his Canterbury colleagues did not agree with the expert neurosurgery panel processes, many of its recommendations, and Prof Kaye's involvement "especially as chairman".

Michael Hundleby:
Deputy director of the National Health Board described Mr MacFarlane as having had "a road to Damascus experience" . . . and being able to appoint Mr MacFarlane as clinical director had meant progress could be made in a way which would have been difficult if there had been continued animosity.