By Mike Houlahan
0 Comments
A glimpse back in time to horse-drawn chocolate deliveries has been discovered amid the rubble at the former Cadbury factory in Dunedin.

Company records setting out the corporate history of the firms which operated the Cadbury chocolate factory were saved by staff demolishing the building to make way for the new Dunedin hospital.

The historical hoard was found in a cupboard on the second floor of the complex’s office building.

Its 16 volumes included Hudson & Co’s business records from 1899 to 1988, and incorporate its transition from a company firm established by Richard Hudson and the merger with Cadbury Fry in 1929.

The cover of one of 16 books of company records discovered in the former Cadbury factory. Photo: Gerard O'Brien

"They’re a fantastic record of the development of the business as it transformed, went through two world wars, adapted to changing technologies and labour laws, and became a modern business in the 20th century,"  New Zealand Heritage Properties principal archaeologist Megan Lawrence said.

‘‘Hudson & Co was a family business, with each of Hudson’s six sons having a role to play. 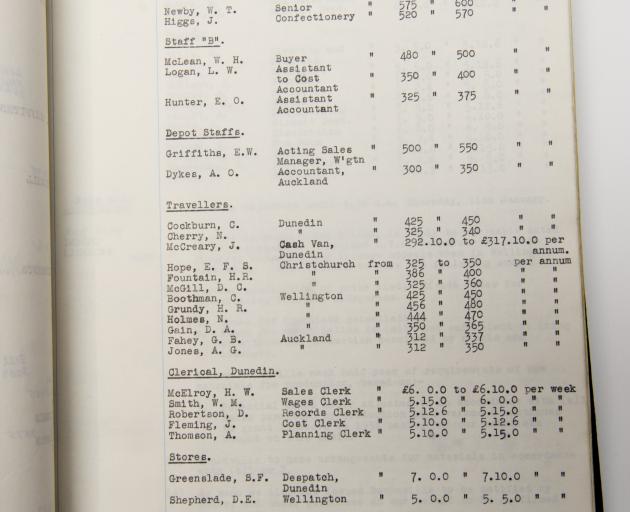 Wages and salaries at Cadbury as of January 1940. Photo: Gerard O'Brien

"His son Richard became the factory manager, Robert was the works manager, Arthur was the biscuit baker, Charles looked after the flour mill, Bill was an engineer, and [Ambrose] was the chocolatier.’’

The first entry, written in ornate cursive on cream-coloured paper, reads: "A meeting of the Directors of this Company was held at the office of R. Hudson & Co. Moray Place Dunedin on Monday the 20th February 1899 at 4 p.m."

Hudson & Co. was not the first business to occupy the site, which was used for a whiskey distillery and a brewery before being purchased by Hudson in 1898.

“Hudson moved in Dunedin in 1868 and became a pastry cook, operating in an arcade off High Street. He’d go down and sell biscuits at the docks. He later purchased an old masonic hall on Moray Place, putting a factory there in 1876.

"He came to New Zealand and trained in biscuit manufacture in Christchurch alongside John Griffin, who later went on to found Griffins Biscuits."

“Along with biscuits and chocolate, Hudson’s range grew to include lozenges with flavours we might consider unusual today – peppermint, clove, musk, cayenne, ginger, lavender, rose and pear.” 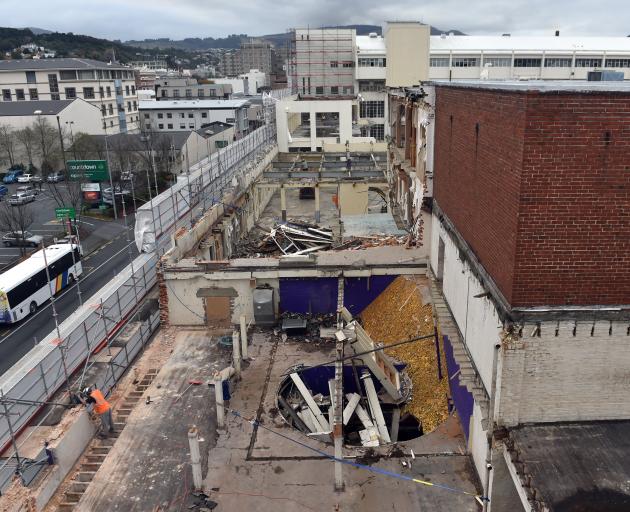 The historical hoard was found in a cupboard on the second floor of the complex’s office building. Photo: ODT files

Ms  Lawrence knew Richard Hudson’s story well but reading through the old records, she and the team had learnt even more about the historic family business.

“We can see that they were expecting their first ‘motor wagon’ in June 1913, but they were looking to build a new stable too.

In June 1916 raw materials were noted as being expensive due to the war, but trade was considered very satisfactory. And on 13 July 1929 they passed a resolution to merge with Cadbury and become Cadbury Fry Hudson Co.

From 1921, type-written entries can be found glued into the books alongside handwritten entries, and the later books are fully typed.

The last record, dated 11 May 1988, notes the Board appointment of FW Swan from Cadbury Schweppes Australia.

A Ministry of Health spokeswoman New Dunedin Hospital  said the project respected the heritage values of the site and was working with Ms Lawrence to ensure historical finds were preserved, and their stories told.

Any finds on the new Dunedin hospital site were recorded appropriately and the historic Hudson & Co. books were likely to find a new home in a museum or collection.

Ms Lawrence  said the books were not the only interesting artefacts found in the Cadbury office block.

"When the old plans were being digitally scanned for posterity, some particularly tasty discoveries were made.

“We also found the plans for the Curly Wurly machine and the chocolate fish mould," Ms Lawrence said.