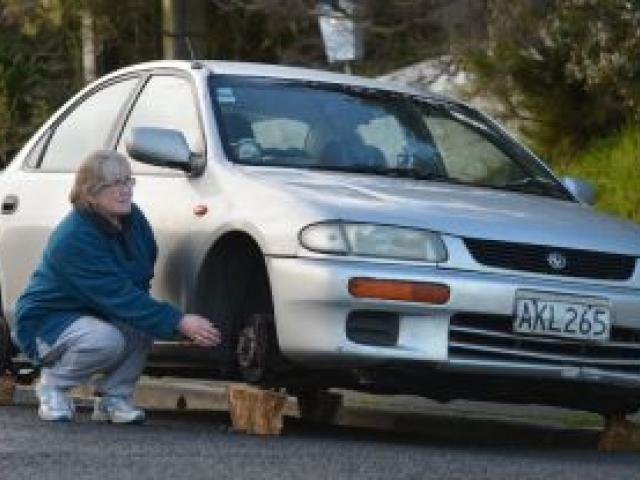 Caregiver Joan Haslemore, of Concord, with her Mazda Familia on wood blocks after its mag wheels were stolen. Photo by Peter McIntosh.
A caregiver ready for a day's work helping elderly and disabled clients was unimpressed to find her car on blocks and all its wheels stolen.

But when she left her house yesterday morning to drive to work, her car was resting on firewood blocks, four mag wheels gone, and the wheel nuts were strewn in the gutter.

The day's work included helping elderly and disabled people to bathe and dress but because of the theft she could not visit them yesterday.

Her boss was understanding when she called to say she had ''no wheels'' to visit clients.

The wheels were on the car when she bought it and the tyres were near new, she said.

The car was fully insured but she doubted she would buy mag wheels because she believed they had been stolen to order.

She would investigate buying second-hand wheels because it could be cheaper than paying her insurance excess.

Although the neighbourhood was good, her car radiator grille was stolen about a year ago, also when she was parked on Mulford St.

The last time she saw her wheels was 10pm on Monday and the next-door neighbours had heard unusual noises and a vehicle leaving the street about 1.30am, she said.

Although she had no off-street parking, she warned Dunedin residents of the risks of parking on the road overnight.

''It is quite unusual because it has obviously taken them some time to jack the car up and take four wheels off.

''They've been there for some time and came prepared.''

If the public heard ''unusual bumps in the night'' they should contact police, he said.

If anyone had any information on the mags or saw anything suspicious they should contact police on 471-4800.