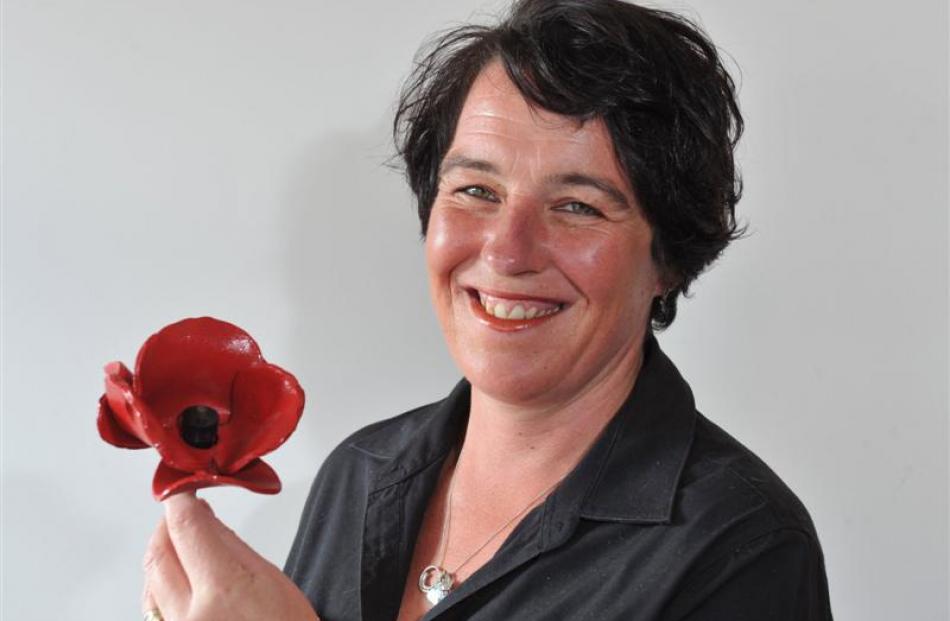 Wendy Boyne, of the Mosgiel RSA, holds the Tower of London Ceramic Poppy given to the Mosgiel RSA by Mosgiel resident John Noble. Photo by Gregor Richardson.

A tower of London ceramic poppy sent from the UK by a friend of Mosgiel resident John Noble has gone on display at the Mosgiel RSA in time for Anzac Day.

Mr Noble's friends, David and Margaret Milner, of Yorkshire, arranged the purchase and forwarding of the poppy, one of 888,264 made to mark the centenary of World War 1. Each poppy represents a British or Colonial fatality during the war.

He joined the RNZAF during World War 2. After the war, he returned to New Zealand briefly and then moved to the UK to live with his English war bride.

Mr Moore said the Mosgiel RSA was very proud to be able to display the poppy.

''It's very significant. The poppy is one of thousands which officially represent every British fatality in the war. It's good to have that connection here in Mosgiel.''

Mrs Milner has asked that the poppy commemorate her great uncle. Private Peter Finlayson, who was killed in action in World War 1 in June 1917.

It also commemorates Mrs Milner's grandfather, Private William Cross Finlayson, who died six years after World War 1 as a result of illness contracted in the trenches on the Western Front.

• Anzac services for the Taieri will be held in Mosgiel.

A parade will start at the Mosgiel RSA and march north on Church St at 9.15am to Anzac Park for a memorial service.

In Outram, a parade will leave from the Community Hall at 11.15am.

Green Island residents will be part of the Dunedin service, which starts at 6.15am with a street march on Crawford St, ending at the Dunedin Cenotaph in Queens Gardens, followed by the traditional dawn service.