Trial proves worth of dressing in radiation treatment 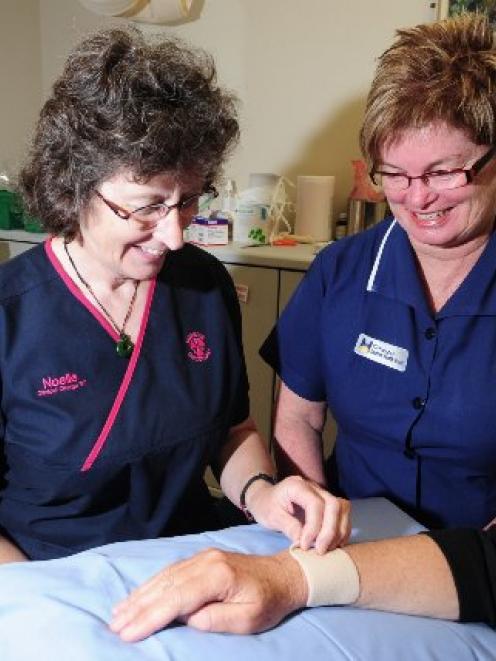 Dunedin Hospital clinical charge radiation therapist and radiation oncology professional director Noelle Bennett demonstrates how easy it is to remove silicone-foam dressings, which are used to treat skin irritation from radiation treatment. Oncology nurse and adult complex care co-ordinator Jo Tuaine looks on. Skin cells and hair do not stick to the dressings. Photo by Craig Baxter.
The success of a small Dunedin Hospital clinical trial has received international recognition and may lead to widespread improvement in skin treatment for cancer patients having radiation therapy.

The trial, conducted in 2008, was led by medical radiation technologist Katie Diggelmann, who now works in Hamilton.

She was keen to complete her University of Otago studies with research linked to patient care. She chose skin care after radiation treatment because there was no standard evidence-based treatment for it.

Southern District Health board oncology nurse and adult complex care co-ordinator Jo Tuaine suggested testing the silicone-foam dressings because she had used them and noted they appeared to be better at soothing irritation than the usual aqueous, or water-based, creams.

In the trial, once an area became slightly red, it was randomly divided in half.

One side was covered with the dressing and the other was treated with a cream.

The dressing, which is used in some other types of wound care, does not have to be removed for radiation treatment.

Ms Tuaine said patients found the dressings comfortable and unlikely to cause irritation. They could also be removed without discomfort and reapplied after showering, allowing them to be used for three or four days.

The dressings are expensive: a box of four small ones costs about $60, so it was important that the use of them was based on good evidence.

The use of the dressing is now standard practice at Dunedin Hospital, not only for breast cancer patients but for others undergoing radiation treatment.

Radiation burns were different from standard burns because of the way they were caused, and this meant standard burn treatments did not necessarily work.

The study found patients had a decreased risk of skin peeling and shedding or of developing long-term side effects such as scarring and pigmentation.

Ms Diggelmann's study has been published in the latest edition of The British Journal of Radiology.

Research assistance was provided for the study by the University of Otago's Wellington campus and funding from the dressing's Swedish manufacturers, Molnlycke Health Care.