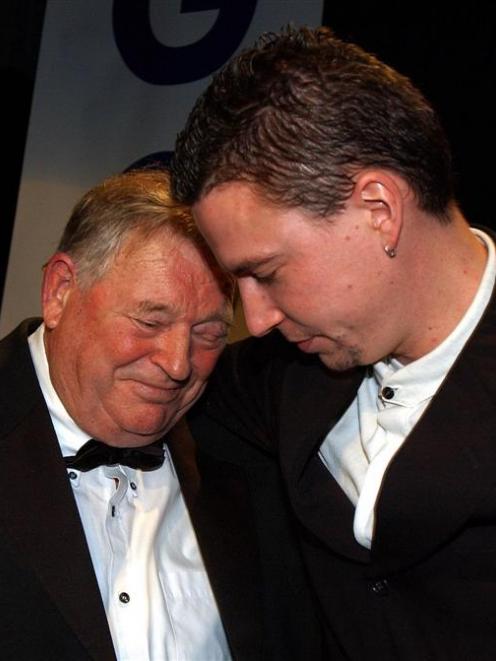 Loader shares a special moment with Duncan Laing during a tribute evening in 2002. Photo by Jane Dawber.
Double Olympic gold medallist Danyon Loader said the death of Duncan Laing, his coach and friend, was a big loss personally and a blow for all New Zealanders.

The pair formed one of country's most successful sporting relationships, combining for two gold medals at the Atlanta Olympics in 1996 and a silver medal at the Barcelona Olympics in 1992.

"For me, it is a big loss, but it is also a big loss for Otago swimming and for a lot of the swimmers who have come through his programme and have spent a lot of time with him," Loader said.

"He was a tremendously good coach of rugby as well, and also surf life-saving. So he has influenced a lot of people, not only in Dunedin, Otago and New Zealand, but the world as well."

Loader was a shy 10-year-old when he first met Laing.

"Even back then he said, 'we've got a champion there if only we can harness him'. That's how he was. He could see the potential in all his young swimmers."

That eye for talent served Laing well throughout his career. He coached 11 Olympic swimmers during a distinguished 40-year career, but Loader was the best of the bunch.

While Loader had immense talent, the swimmer credits Laing's guidance and expertise for much of his success.

"Without him I would not have been as successful as I was. It was just a very good match . . . He has influenced me not only as the swimmer I was, but also as the person I am. He has helped shape who I am today."

The two spent untold hours working on technique and rhythm at Moana Pool. And while not every hour spent together was harmonious - "we had our good and bad days, just like in any working relationship" - they always retained respect for each other, Loader said.

"We held together for so long, probably because we still had respect for each other and were moving forward. I was lowering my times and [improving] my world ranking, so we were always looking ahead."

Loader last saw Laing just before the Beijing Olympics. They talked about United States swimmer Michael Phelps' bid to become the most successful Olympian and how the New Zealand swim team would do.

"He was a person you could always feel relaxed with. No matter where he was in the world he could strike up a conversation."

Loader, who works in Wellington for the New Zealand Olympic Committee and as an ambassador for Sparc, expects a large turnout at the commemorative ceremony at the Edgar Centre in Dunedin on Wednesday.

He coached 11 Olympians "but was also involved in the full spectrum of coaching, from learning to swim to the elite athletes".

"There are a lot of people who make big contributions to sport [and] clearly Duncan was one of those people.

"I've heard stories that Duncan was a hard task-master and worked his athletes, but he got the results as well."

Byrne said it was too early to say if Swimming New Zealand would hold a special ceremony to commemorate Laing's life. However, he said such a function would be appropriate.