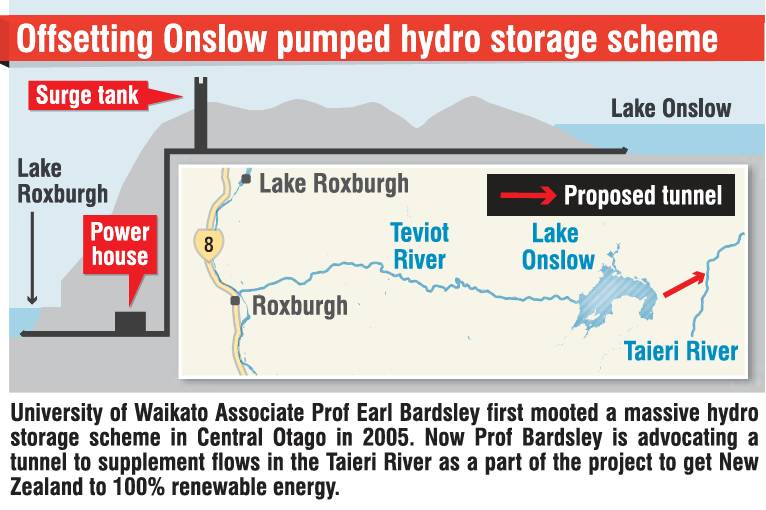 A tunnel linking Lake Onslow to the headwaters of the Taieri River could counterbalance the environmental damage that would be caused by a proposed $4 billion-plus hydro storage project.

Project Onslow has been touted as the only way for New Zealand to reach its net-zero 2050 emissions target.

It would create hydro-electric storage twice the size of Lake Pukaki that would help New Zealand through its once-in-a-decade dry years.

But flooding the Central Otago lake would also destroy habitat around it, and drown yet another of New Zealand’s wetlands.

However, University of Waikato associate professor Earl Bardsley, who first mooted Project Onslow in 2005, said the project could have environmental benefits in its surrounds, as well.

The proposed hydro storage lake could be used to protect the sensitive Upper Taieri scroll plain, and also allow for the re-creation of the nearby Great Moss Swamp, he said.

Project Onslow would drown a wetland as the lake expanded from 8sqkm to up to 50sqkm, taking in water through an uphill 24km tunnel from Lake Roxburgh.

But just the other side of Lake Onslow were the upper reaches of the Taieri River, Prof Bardsley said.

And a much shorter 3km tunnel could allow a "tiny" fraction of Onslow’s stored water to be used in years when irrigation taxed the Taieri.

"It would be very expensive water," Prof Bardsley said. "It would have to be lifted up some 600m.

"But the critical thing is it would be very valuable water just at those few times when the irrigator is effectively running out of water during a severe drought."

An issue for local Maori to consider would be the mixing of water if Taieri River flows were to be supplemented by water from the Clutha River, Prof Bardsley said.

But the tunnel could serve to keep the Taieri River flow at an adequate level so that irrigation along the river could continue.

Further, during droughts it would maintain water levels in the Upper Taieri scroll plain, he said.

Lake Onslow water could play the same role as present water releases from the nearby Loganburn Reservoir, he said.

It would provide better drought security than the reservoir because Loganburn had limited water storage capacity.

And the Loganburn reservoir could ultimately be dramatically reduced in size, and

in this way, the Great Moss Swamp could subsequently be re-created as a further offset against the loss of the Onslow wetlands, he said.

The lost wetlands at Onslow would be of lesser overall area than the originally 500ha Great Moss Swamp, Prof Bardsley said.

Last month, when touting the project in Dunedin, Environment Minister David Parker said once again Otago was being asked to bear the local environmental damage of a major project benefiting all New Zealanders.

But there could be offsets, including protection of wetlands, Mr Parker said.

If the project went ahead New Zealand could meet its 100% renewable electricity by 2030 target, he said.