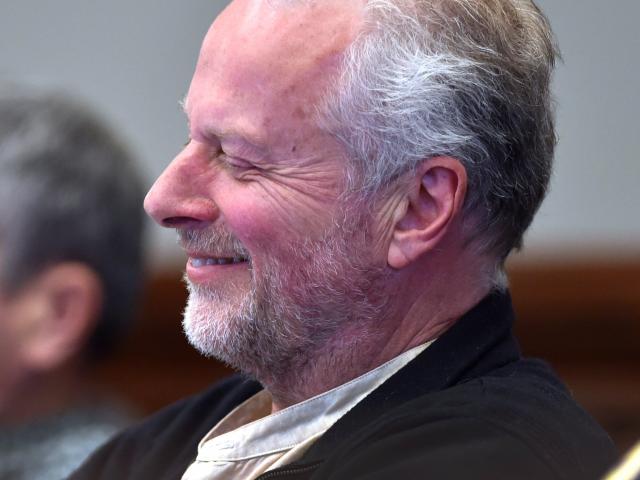 Lee Vandervis. Photo: ODT files
Dunedin city councillor Lee Vandervis is set to argue a High Court judge made a series of errors when ruling against him concerning a parking dispute.

Justice David Gendall dismissed Cr Vandervis’ application for a judicial review last year after the councillor’s colleagues had found him in breach of the Dunedin City Council’s code of conduct following an investigation.

Investigator David Benham found Cr Vandervis had been ‘‘loud, aggressive and intimidating’’ towards a staff member in September 2019 and the council issued him with a written censure.

Cr Vandervis wants the Court of Appeal to set that aside.

As of Tuesday, the court had not yet set a hearing date.

The incident stemmed from Cr Vandervis being ticketed for exceeding the half-hour time limit where he had parked.

He has taken particular issue with the claim he tried to get a parking ticket waived, arguing instead he attempted to report a malfunctioning, mislabelled parking meter.

In his notice of appeal to the court, Cr Vandervis’ counsel, Len Andersen QC, argued the councillor was not told during the investigation that the allegation included a claim he was trying to use his influence as a councillor to avoid paying for a parking ticket.

Among the other grounds for appeal was that Justice Gendall erred in determining any defects in the investigation process were remedied by the opportunity Cr Vandervis had to defend himself at the council meeting in which councillors delivered their verdict.

Cr Vandervis has asked the Court of Appeal to set aside the council’s decision that he breached the code of conduct, as well as the censure.

He is seeking a declaration that former council chief executive Dr Sue Bidrose acted unlawfully in the way she handled or passed on the complaint.

Mr Andersen had argued in the High Court Dr Bidrose was the only person entitled to make a code of conduct complaint, but she seemed to act as a facilitator, rather than assuming responsibility.

In the grounds for appeal, he said Justice Gendall was wrong about the complaint being made by the chief executive.

Cr Vandervis is seeking a declaration Mr Benham had no jurisdiction to receive the complaint and that he acted contrary to the principles of natural justice.

After the High Court decision, Cr Vandervis wrote that it was now unwise for elected representatives to criticise any staff member not doing their job or to be a whistle-blower in the public interest.

Cr Vandervis constantly breaks rules of respect, proper conduct and natural justice regarding other people’s dignity but strenuously objects when he sees himself on the receiving end. It is not an elected rep’s job to see that staff are doing their job properly; it is solely the Chief Executive’s. As for whistle blowing, there are now procedures and audit controls that greatly reduce the risk of fraud. It was the new Chief Executives, briefly Orders and later Bidrose, who made the constructive difference — also former Finance Committee Chair, Richard Thomson, external financial advisors and long-term Finance Chair, Mike Lord. Twenty years ago, IMO the DCC did often act without much regard for the law and Vandervis was one of the very few who didn’t keep his head down and his mouth shut. But he is not acting in the public interest now. This litigation is petty and trivial. It hardly matters whether he breached the code of conduct on this occasion when he publishes offensive doggerel about his fellow reps. Kindest for the voters to retire him before he further embarrasses himself.

As always, a very succinct and knowledgeable summary of the situation. You clearly take the time to understand how the council actually works, unlike many of the contributors to this forum.

I totally agree with your comments.

Dunners: I appreciate your comment. Thank goodness Dunedin at last has a residents’ and ratepayers’ association! Democracy can’t work properly without at least a few engaged citizens who can hope to be credible witnesses at least to the public part of local government, because they neither want to stand for office nor sell newspapers.

Diane Well you maybe right in some aspects look at the bigger picture how would you like to always be stone walled and have a group of other councillors plot against you? it would become very frustrating would it not? We can all see that Cr Lee Vandervis has had a smear campaign plotted against him in a critical time to be come Mayor by those he works with and the same people who don't like his sometimes outspoken approach to things, I put this down to because they know it will not put them in good stead shines the spotlight on them . Bidrose refused to answer Cr Lee Vanderis emails which would have ben frustrating, this was the same as Cull when I asked him questions when he was running for Mayor. Hawkins is the same. IMO this happens way to much with people in positions now days they just hope you go away and fade into the back ground and shut up. not on when it is a manager or a person in a position of trust like Hawkins, Bidrose especially when they continue to portray to people that they are all that and a packet of chips. Maybe look at the other side yet again here people are saying it is Cr Vandervis who is in the wrong, look at the other side of the Councils fence.

I rest my case.

So your case anyone who disagrees is a fool?, are you on the council?

Since Left: I never said the ‘other side’ was squeaky clean. Yes, plenty of times at Council meetings I see provocation, sometimes extremely subtle. But I don’t think that justifies or excuses fiery, out-of-control retaliation.