Volunteers keeping the pressure off 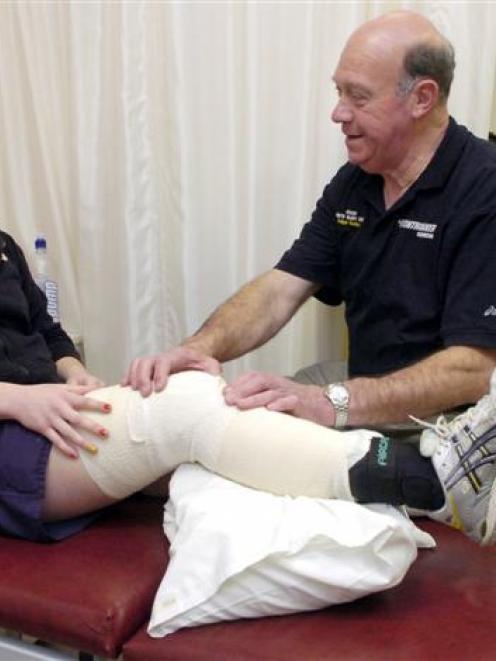 Medic Graeme Harvey treats Emma Beaven for a netball injury at the Sports Injury Clinic in the Edgar Centre on Saturday. Photo by Jane Dawber.
A group of volunteer doctors, physiotherapists and sports medics is being credited with keeping Dunedin Hospital's emergency department free for emergencies.

The Dunedin Sports Injury Clinic treats up to 80 injured sports people on a winter weekend.

Emergency department clinical leader Dr John Chambers said the clinic dealt with many sports injuries and had done a good job for many years.

Anecdotally, the clinic did reduce the number of people coming to the emergency department, but it was hard to quantify how much, he said.

The department has been struggling to cope with its workload and the Otago District Health Board is investigating ways to reduce the number of people who do not need emergency care out of the department.

Dr Newsham-West said the clinic was the only one of its kind in New Zealand and had been running since 1963.

The clinic has about 40 volunteers, including doctors, physiotherapists and sports medics, who have done a training course with Sports Medicine New Zealand.

It also has physiotherapy students.

All the volunteers got involved with the clinic because they were passionate about sport, he said.

"It began more than 40 years ago when a couple of doctors in Otago decided they wanted to look after sports medicine and set up a little cordoned-off area in the Dunedin Rugby Football Club."

The clinic moved to the Edgar Centre in 2005 and will treat any injured sports person, although most of the injuries they treated were sustained during netball or rugby, he said.

Treatment at the clinic is free.

"We can see everyone and anyone within 10 minutes."

Early management of an injury led to faster recovery, less time away from a person's sport, education or work, and could save money for both the injured person and ACC, Dr Newsham-West said.

Dr Newsham-West said the clinic closed during summer, but did attend sports events such as the Dunedin Marathon, cycling races and the Masters Games.