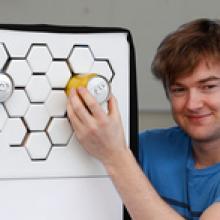 Ben de la Roche demonstrates his revolutionary refrigerator design on a concept model. Photo / Mark Mitchell
The "cool idea" of an open wall refrigerator has won a student from Dunedin some cold cash at an international design award in Italy - and is impressing internet users.

Ben's father, Judd de la Roche, said he watched in Dunedin via a live webcast as his son gave a 10-minute presentation to a panel of judges at 3.30am on Friday.

His son's "cool idea" was one of 10 finalists selected from the more than 1200 entries from 50 countries, he said.

The Massey University industrial design student, who studies in Wellington, designed the Impress Refrigerator that holds food and drinks out in the open rather than behind closed doors.

It used less power when fewer items were pressed into it, and no power when empty, Mr de la Roche said.

After the award ceremony, he struggled to make contact with his son because bloggers were continually calling him for interviews, he said.

A video of the fridge had been popular on YouTube since Electrolux published videos of the finalists, he said.

The video showing the former John McGlashan College student's design had more than 277,000 views, many more than the other finalists, he said.

"It has really struck a chord with people. It is something really unique."

The winning design, from Poland, of an air cleaning and filtering system, had fewer than 5000 views, he said.

The design brief for the competition was to "present innovative ideas for household appliances of the future" and judges said the fridge was "a visual experience that is energy-saving and simplifies the user's life".

The design was practical because busy restaurants could push food and drinks straight into the wall and easily see the stock available, Mr de la Roche said.

His son was inspired by pin art, where pins could be slid in and out independently of each other to create 3D models, Mr de la Roche said.