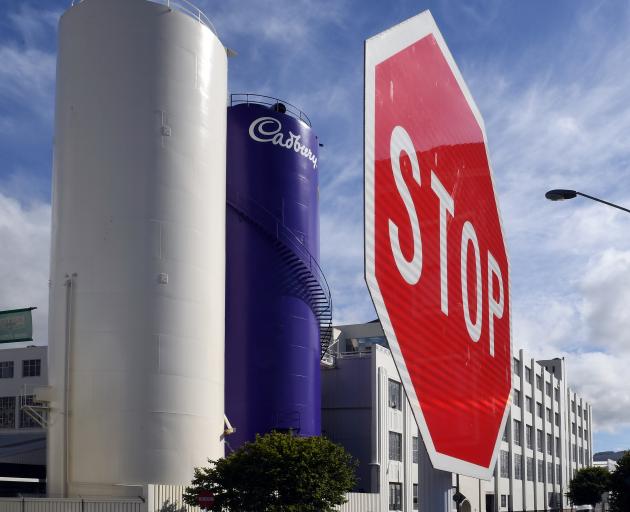 Cadbury staff were warned by Mondelez to think twice about investing in the campaign to save Dunedin's chocolate factory.

The comment, made during a regular monthly meeting between Cadbury workers and representatives from Mondelez last week, has prompted questions from Etu, the union representing some Cadbury workers.

The Otago Daily Times was told a Mondelez manager attending the meeting told Cadbury workers they should "think very carefully'' before investing in the campaign by Jim O'Malley to keep the chocolate factory open.

The comment concerned Etu industrial strategy director Neville Donaldson, who told the Otago Daily Times he planned to raise it with Mondelez during a scheduled conference call on Friday.

He was not at the meeting, but heard about the comment from union delegates who were there.

It appeared to be a "one-off comment'', but it still had the potential to influence workers and the wider campaign, Mr Donaldson believed.

"When someone in a management role makes those comments, then they tend to be listened to.

"I've got to accept at this point that Mondelez are operating in good faith . . . I would be extremely disappointed and annoyed if, in fact, it was saying one thing and doing another, but I've got no evidence to that effect at this time.''

He launched his campaign earlier this month, and has so far gathered almost $6 million in public pledges as a sign of support for the project.

He hoped to turn the pledges into investments, and, together with support from wealthy individuals and other funding sources, raise $20 million to keep the factory open on a portion of its existing site.

She met members of the site leadership team and other staff, and walked around the plant, but did not attend the meeting at which the comment to workers was made, the Mondelez spokesman said.

Instead, it was understood to have come from a Mondelez manager based in Auckland, the ODT was told.

The Mondelez spokesman confirmed a comment had been made, but said it aimed to address "confusion'' among staff about whether the crowdfunding campaign was an investment or a donation, he said.

"We have responded by suggesting to the team they consider their options before making any financial commitments.

"This reflects the broader work under way to provide our people with budgeting advice . . . as part of the support package being delivered to our people before site closure in March 2018,'' the spokesman said.

He dismissed any suggestion the company was opposed to Mr O'Malley's campaign.

"Our assessment process means there are some significant challenges for any manufacturer keen to take on this work, but we will continue to support all three interested parties over the coming days to ensure they have the opportunity to present a strong case to allow us to make a decision to move to the next phase in July.

"The process is on-going and we haven't discounted any of the three options, and have not made this suggestion.

"We will be assessing the business structures and capability of each option throughout July to see if a viable option exists that allows us to provide a seamless transition for our hundreds of small and large retail business partners up and down the country.''