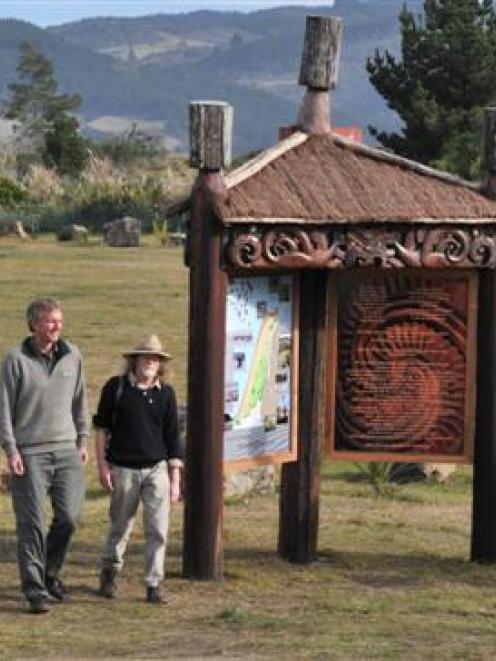 Geraldine Tait, of the Warrington Reserve Group, which worked with groups including Ngati Huirapa Runaka ki Puketeraki, of Karitane, on getting it installed, said the kiosk at Warrington domain would give visitors information about the area and what they could do to help protect its wildlife.

Advice on the sign included not taking dogs on to certain parts of the beach.

In order to make it "unique", the group commissioned Waitati carver Alex Whitaker to carve Maori designs, which surrounded the kiosk's information panels.

Mr Whitaker said the carving brought together elements of the Ngai Tahu creation myth, the area's Maori history, its wildlife and the people living in the community now.

Before Europeans arrived, Maori often used the Warrington area as a stopping-off point as they travelled to other areas, he said.

He was proud of the work he put into the carving and was pleased with the finished article.

Department of Conservation ranger Jim Fyfe said the kiosk was "fantastic" and would help conserve the "rich wildlife" on the coast.

The sign was yet to be fully completed and dolphin researcher Jennifer Turek would be adding another panel, which would inform visitors about the population of about 42 Hector's dolphins living off the Otago coastline, often visiting Warrington.

Ms Turek said the panel would use information from her recently-completed masters project which looked into the distribution of Hector's dolphins in Otago.