Watch: Is the new steepest street deserving of title?

The new steepest street in the world is narrow, windy, one-way in places and has a sign warning it is unsuitable for motorists.

Ffordd Pen Llech is in the town of Harlech in northwest Wales known for its castle and a song Men of Harlech.

It was this morning officially awarded the title of World's Steepest Street on the Guinness World Records website, but it is very different from the two way and straight Baldwin St.

The nature of the Welsh Street has prompted some to question whether it is worthy of the title, but it was good enough for Guinness.

It would appear someone has already got their hands on the signage here at Baldwin Street... @1NewsNZ #second pic.twitter.com/k3vhEigZKY— John Mckenzie (@Johnmck419) July 16, 2019 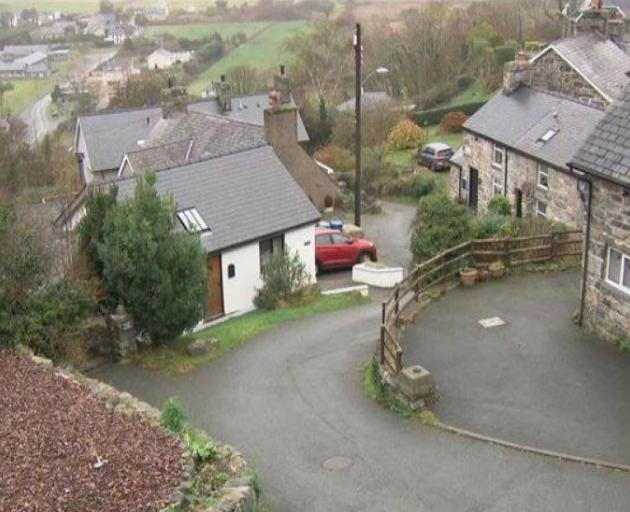 Ffordd Pen Llech in Herlech, Wales. Photo: Supplied
It has no footpath.

At the top it is lined with historic buildings.

Welsh man Gwyn Headley has led the campaign to snatch the title of the steepest street.

An incident a year ago prompted him to start the campaign.

"I have a 4WD car with anti-lock brakes - I got about halfway down [Ffordd Pen Llech] and the car slid forward about six feet with all the wheels locked and I thought: 'This is very steep' ... So I went on to Wikipedia and looked it up and it said it was the steepest street in the UK," he told RNZ.

A sign warns the Welsh street is unsuitable for motorists and its steepest part only allows traffic to travel uphill.

A sign gives a slope reading of 40%, but it is normal practice for United Kingdom highway authorities to round off gradients to avoid confusion.

The Welsh street has a gradient of 1:2.67 (37.45% stretch over fall), meaning those travelling on the street go 1m up or down for every 2.67m travelled horizontally, Guinness said.

That beat the record held by Baldwin St, in Dunedin, which has a ratio of 1:2.86.

Guinness World Records required a blueprint of the street, but Harlech had to justify its absence because the street has been there for at least 1000 years and blueprints only dated back to 1842.