When planets align: ‘fascinating run of events’ to observe 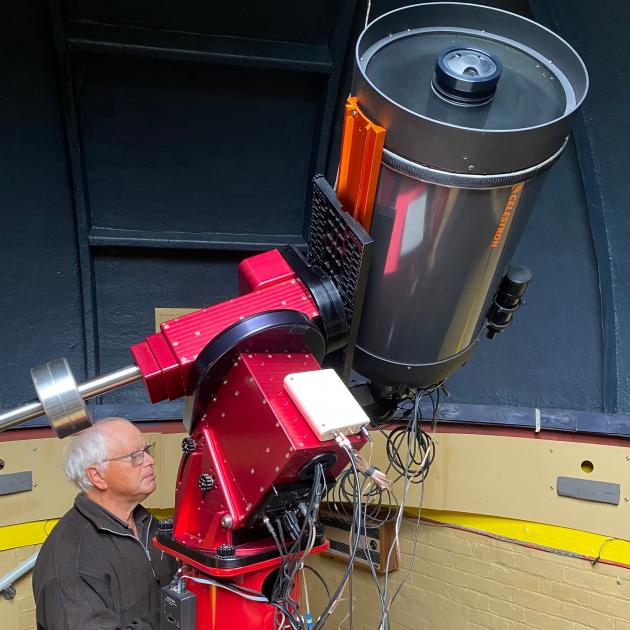 Dunedin Astronomical Society committee member Ashley Pennell works on the large telescope at the Beverly Begg Observatory ahead of several planetary conjunctions coming up in the next few weeks. PHOTO: BRENDA HARWOOD
Some planets are aligning in the coming weeks, giving early risers the chance to glimpse rare celestial phenomena. Brenda Harwood reports.

At irregular intervals during the rest of April and May, sky watchers will have the chance to observe a series of events called planetary conjunctions - where two planets are in alignment with Earth and appear very close together.

Dunedin Astronomical Society committee member Ashley Pennell said the best times to observe the phenomena would be between 5am and 5.30am, by looking east with binoculars or a telescope.

"There are six of these spectacular, fascinating events happening during April and May," Mr Pennell said.

"There are six planets in the morning sky currently - these are close encounters on an unusually grand scale," he said.

For most of April, Mars, Saturn and Venus will be above the other planets, and Jupiter is bright above the horizon.

On April 5, Saturn and Mars were in conjunction, and Jupiter and Neptune are set to be very close in the sky on the morning of April 13.

The phenomena would continue in May, resulting in a "fascinating run of events".

"One of the best events to observe will be Jupiter and Neptune on April 13, when the two planets will rise in the east at around 5am," Mr Pennell said.

"Jupiter will be the second-brightest object low in the sky, and will be visible to the naked eye, although to see Neptune will require binoculars or a telescope," he said.

"Four Jovian moons will also be visible through a small telescope, or even binoculars."

Venus would be very bright and Neptune would appear blue during their conjunction on April 28 — a phenomenon which last occurred in 2009.

"Venus will be moving fairly quickly, so it will be very interesting to watch as it slides past Neptune."

With such spectacular sights to enjoy, the Dunedin Astronomical Society would be opening up the Beverly Begg Observatory, located at Robin Hood Park, in Belleknowes, from 5am on conjunction dates.

"Provided it is not very overcast or raining, we will be able to set telescopes up outside on the grass, so that people can come and take a look," Mr Pennell said.

People were urged to dress warmly and wear flat-soled shoes.

Astronomical society members would also be using the observatory’s large telescope to photograph the conjunction phenomena, he said.

Now that daylight savings is finished, the Dunedin Astronomical Society will return to hosting public sessions at the Beverly Begg Observatory on clear Sunday evenings, from 7pm to 9pm.

The observatory will also open its doors to the public at night during Wild Dunedin, New Zealand Festival of Nature, which runs from April 22 to 28, weather permitting.

Mr Pennell said the recent changes to Dunedin’s street lighting had helped to darken the skies above the city, which had been very beneficial for star-gazing.

"It is very dark up here now, which is a vast improvement."